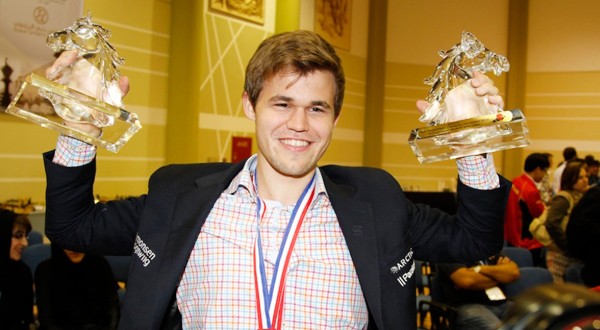 World chess champion, 23-year old Norwegian Magnus Carlsen, won the world blitz championship alone with 17 points in the 21-round tournament at the Dubai Chess Club on Friday. Together with the world rapid crown he won on Wednesday in the week long Fide World Rapid and Blitz Championhips in Dubai, Carlsen now holds all three Fide world titles.

The $400,000 prize money event in Dubai saw Carlsen who will be defending his traditional world title against Viswanathan Anand of India later this year, go home richer by $80,000 ($40,000 each for the rapid and blitz crowns).

One hundred and three GMs including 16 of the top 20 in the world, five IMs and three CMs took part in the best field ever in Dubai since the Chess Olympiad here many years ago.

The second day of the blitz championship on Friday was marked with a tough competition between Magnus Carlsen and Ian Nepomniachtchi of Russia, a release from the organisers added.

Nepomniachtchi won six games at the start and after 18 rounds was solo leader, half a point ahead of Carlsen.

The undisputed world champion said at the final Press conference: “At that point it was certainly in Ian’s hands”.

The critical moment came in the 19th round when Nepomniachtchi drew with Anton Korobov of Ukraine and Carlsen managed to win a dramatic game against Rauf Mamedov of Azerbaijan.

Therefore the struggle between the Norwegian and Russian players continued. While Carlsen showed a perfect result in the last 2 rounds, Nepomniachtchi failed in the game against Aronian and the victory in the last round over his compatriot Alexander Morozevich guaranteed him only the silver medal in the championship.

Hikaru Nakamura of the US won his last five games to win the bronze medal. The heroes of the first day, Lu Shanglei of China and Georg Meier of Germany feel from the top boards but there was another dark horse – Russian GM Sergey Yudin, who climbed from 86th seed to finish 12th place.

On the second day the lone woman, Judit Polgar of Hungary, continued to fight against top players and defeated Fabiano Caruana of Italy and Evgeny Tomashevsky of Russia. Unfortunately, in the last six rounds she scored only 2 out of 6 and finished in 26th place.