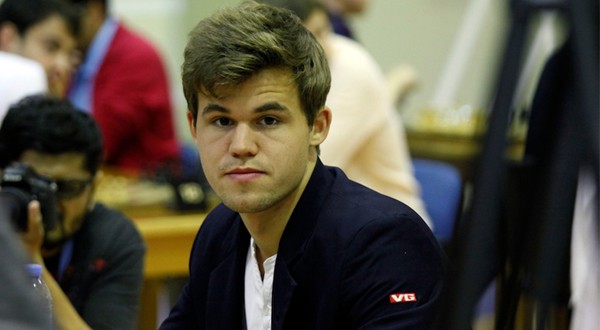 Traditional chess world champion Magnus Carlsen of Norway and former world number one Viswanathan Anand will lead a powerful field of over 100 Grandmasters (GM) during the Fide World Rapid & Blitz Chess Championship at the Dubai Chess and Culture Club (DC&CC) from June 15 to 21.

This will be a rare opportunity for the followers of the game here to see at first hand, the very best of the best in the world. Sixteen of the top 20 GMs in international chess will go all out in two separate championships (rapid and blitz) where the Fide recommended $200,000 for each section will be on offer.

The winner of each tournament will be richer by $40,000. The rapid championship (15 rounds) will be held during the first three days, followed by two days of the blitz championsip (21 rounds), with sessions beginning at 3pm.

The championships will see a record 124 players from 46 countries competing for the titles. Russia has 19 entries, Ukraine 9, Azerbaijan 8, India 8 and the UAE 7. The UAE’s top contender will be veteran Salem R. Saleh, ranked 93 in the participating list with 2539 IRtg.

US GM Hikaru Nakamura (2879) heads the rating field followed by Russian Sergey Karjakin (2866) and Levon Aronian of Armenia on 2863. Carlsen lies rated fourth on 2837 and Anand, sixth with 2827, below Frenchman Maxime Vachier-Lagrave (2835).

The estimated budget of the event to be staged near the Al Shabab Club and the Century Mall in Mamzar, Dubai, is close to $1 million, officials mentioned during a Press conference at the Mövenpick Hotel Apartments, the Square, Dubai close to DC&CC.

International arbiter and former Philippines chess veteran Casto Abundo said: “The field is unbelievable and the instant versions of the game will see many upsets and thrilling battles on the board.

“The rapid version, stipulated at 25 minutes and the super fast 5-minute blitz form, will throw up challenges from unknown quarters. Thanks to Bobby Fischer, the former world superstar who turned the game around with his revolutionary approaches and methods, rapid and blitz are standard international packages in the Fide schedule. We will be able to see the best in the GM lineup of Fide superstars here in Dubai next week.”

The Dubai championships will be Fide’s (world body) third tournament for the shorter versions of the game after 2012 in Astana (Kazakhstan) and the second in Khanty Mansisk (Russia) in 2013.