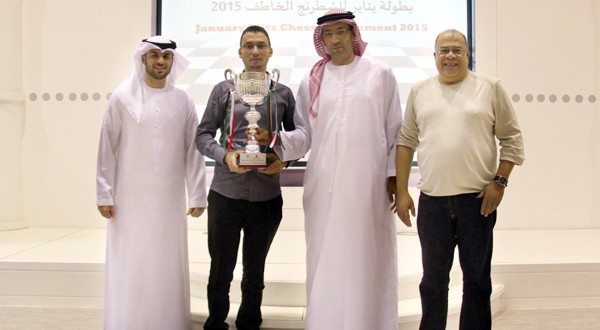 Basheer Al Qudaimi outplayed fellow International Master Mehrshad Sharif in the final round to crown himself champion in the inaugural January edition of the Dubai Chess and Culture Club’s Monthly Blitz Chess Tournament.

The national team player from Yemen scored eight points in nine rounds, winning eight matches while conceding a single loss to runner-up Francis Erwin Dimarucut of the Philippines in the third round. Al Qudaimi, who serves as one of the instructors at the club’s chess academy, won six games in a row to following his third-round setback to claim the champion’s trophy. “This is a great start to the new chess season for me,” said Al Qudaimi. “This will also serve as an inspiration for me as I impart my chess knowledge to my students and help develop new talents for the club.”

Dimarucut took the runner-up spot after edging out the top-seeded Spanish Grandmaster Viktor Moskalenko with a superior tiebreak score. Both players scored 7.5 points after splitting the point in their final-round encounter.

The UAE’s Hamad Abdul Razzaq and Fide Master Othman Moussa tied for the fourth to eighth places with seven points apiece. Others who finished with seven points were Ravshan Khamroev from Uzbekistan, Mehrshad Sharif from France and Danny Baltazar from the Philippines.

More than 100 players took part in the tournament, including dozens of students from the club’s chess academy.

“This is a great exposure for our students to play against masters and veteran players,” said Najib Saleh, Head of Technical Committee at Dubai Chess club. “We expect tougher competition and more exciting matches as other chess masters are expected to take part in the succeeding editions of the monthly blitz tournament.”