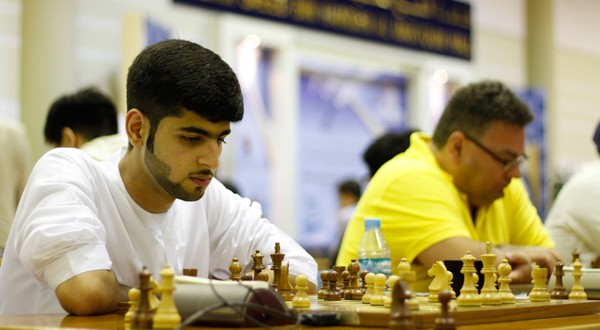 Fide Master Ibrahim Sultan demolished the competition to win the gold medal in the premier Under-18 category of the Arab Age Group Chess Championships, which concluded Saturday in Abu Dhabi. Despite starting the tournament as the fifth seed, the 17-year-old stalwart of the Dubai Chess and Culture Club scored an impressive eight points in nine games, conceding only two draws, to secure the host country’s lone gold medal in the prestigious championships.

Sultan completed his dominating performance with a victory over Lebanon’s Hamad Mohammad in the ninth round, further distancing himself from tough field, which included Algerian International Master Nassr Ali, the tournament top-seed who settled for the silver medal 1.5 points behind the champion from Dubai. Sultan and Ali split the point in their third-round encounter.

“This victory gives has boosted my confidence to pursue greater achievements in international competitions for my country,” said Sultan. “My training at the Dubai Chess and Culture Club and the invaluable support and guidance of the club’ coaches and officials have been crucial in keeping me focused on my goal to be a champion chess player.”

Hamdan Marshool added a bronze to the UAE’s medal haul by securing third place in the Under-18 category.

The gold medal was Sultan’s second in the Arab Age Group Chess Championships, having won the gold in the Under-16 division in 2013 in Jordan. Under the tutelage of Azerbaijani Grandmaster Elmar Magerramov, a contemporary of legendary world champion Garry Kasparov during their junior years, Sultan also picked up more 100 rating points during the tournament, further underlining his overpowering performance.

“Ibrahim’s performance was even more impressive considering he was away from chess for some time because of school commitments,” said (Najib Saleh- Head of Technical Team at Dubai Chess Club), noting that Sultan is in his final year at Omar Ibn Al Khattab School.

Meanwhile, Ahmad Fareed Ahli, UAE National Player and another Dubai protégé, won the bronze medal in the Under-16 category in only his first try in the pan-Arab competitions. The 11th grader at Dubai Secondary School was also awarded the Candidate Master title for his achievement.

“Ibrahim and Ahmad have been among the top students of the Dubai Chess and Culture Club and we are truly proud that they are realising their potential under the guidance of the club’s & National Team coaches,” said (Jamal Al Abdooli- General Secretary of Dubai Chess Club). Their performance will serve as an inspiration as we continue to mould a new generation of players who will bring honour to the country and reinforce the UAE’s standing in international chess competitions.”