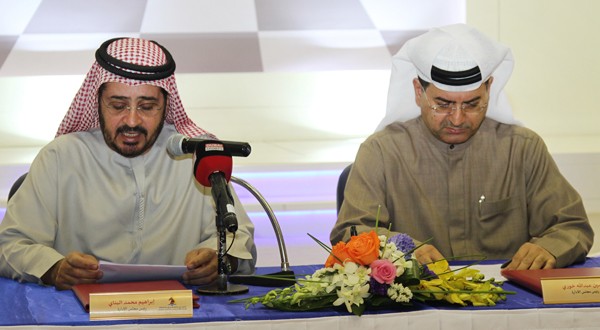 Two of the UAE’s most prominent institutions in chess are joining forces to enhance further the development of the sport in the UAE and create more opportunities for the country’s elite players to dominate in international competition.

Dubai Sports Council Secretary-General Saeed Hareb and Abu Dhabi Sports Council representative Fadel Khalil Al Mansouri attended the signing ceremony at the DCC headquarters, which chess officials said is an important breakthrough in the development of chess in the UAE. The agreement is also supported by the UAE Chess Federation.

Ibrahim Al Bannai, Chairman of DCC, and Hussein Abdullah Khouri, Chairman of ADCC, the signatories to the agreement, both expressed their strong commitment to collaborate in various projects that will benefit all UAE chess players and likewise complement the UAE Government’s sports development programme.

Al Bannai said the two clubs are already working on new strategies to accelerate the development of up-and-coming chess players who will banner the country’s colours in international competitions such as the World Chess Olympiad. He said top-notch grandmasters hired by both clubs to train their respective elite players can be tapped to facilitate inter-club training activities as part of the agreement.

ADCC’s Khouri, for his part, said the agreement is a natural progression following years of successful collaboration between the two clubs, which are both recognised by the global chess community for organising two of the biggest annual chess events in the world – the Dubai Open Chess Tournament and the Abu Dhabi Chess Festival.

Under the agreement, both clubs have also agreed to collaborate in organising local and international events, organising training camps and friendly matches, and providing support for national team players preparing for international competitions.