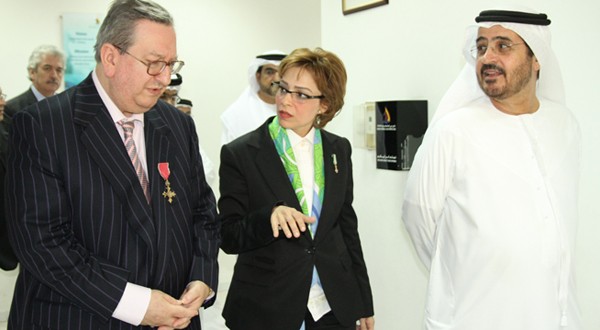 The UAE has strong potential to produce mind sport champions given the right training and support, according to international luminaries from various mind sport disciplines who recently met with Dubai Chess and Culture Club officials to discuss various ways to promote mind sports in the UAE.

H.E. Ibrahim Al Bannai, Chairman of Dubai Chess and Culture Club, said the club’s chess training programme could also provide the framework for similar initiatives that will develop the abilities of promising mind sport athletes in the country.

Chess Grandmaster Raymond Keene, who has helped organise several World Chess Championships and Mind Sports Olympiads, eight-time World Memory Champion Dominic O’Brien and Dr Manahel Thabet, who was named Genius of the Year for Asia in 2013, visited the Dubai Chess and Culture Club as part of the club’s ongoing efforts to collaborate with international organisers and experts in the world of mind sports.

“Dubai Chess and Culture Club has a strong grassroots chess development programme, which particularly aims to develop the chess and mental abilities of the youth,” said Al Bannai. “Our collaboration with intellectual luminaries from around the world is part of our commitment to adopt modern and innovative teaching methods and to further strengthen and expand our programmes through the exchange of knowledge, expertise and best practices. “Raymond Keene, who has been appointed an Officer of the Order of the British Empire [OBE] for his services to chess, has provided invaluable insights, especially with his extensive experience in organising World Chess Championships and Mind Sports Olympiads. Dominic O’Brien and Dr Manahel Thabet have been equally helpful, particularly with their know-how in mental training and development. Furthermore, the club’s successful chess training programme for young chess players could also provide a solid framework for the UAE to develop top-calibre athletes in other mind sport disciplines.”

Keene, who is the second British player to earn the chess grandmaster title, noted that Dubai already has experience in hosting important international chess events, including the 27th World Chess Olympiad in 1986, where the English team captured the silver medal behind the Garry Kasparov-led Soviet Union. He has also played with some of the club’s top players in the early 1980s, including International Master Saeed Ahmad Saeed, the only UAE player to win a gold medal in the World Age Chess Championship, and Adel Jasim Bel Remaitha.

O’Brien and Dr Thabet discussed the possibility of Dubai organising future editions of the annual World Memory Championships, pointing out that the emirate already has world-class facilities and infrastructure needed to host such an international competition.