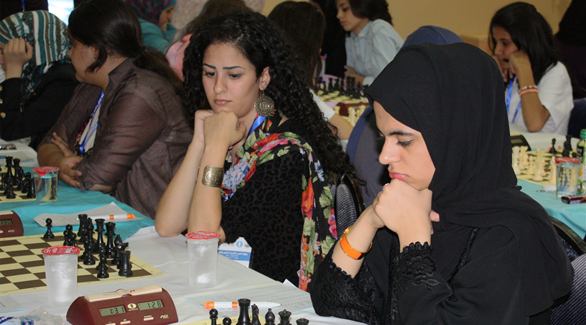 Inspired by a commanding performance by the UAE’s most promising lady player, Dubai Chess and Culture Club ruled this year’s UAE National Women’s Team Championship, which concluded over the weekend. The eight-member squad picked up 8.5 points from three matches to claim the championship along with two individual gold medals.

Woman International Master (WIM) Amna Nouman won all her three matches to lead the Dubai team, punctuating her unbeaten run with a crucial final-round win over Sharjah’s top player WIM Nora Mohd Saleh in a showdown between the tournament’s top contenders. Nouman, the heroine of the UAE women’s Olympic team at last year’s World Chess Olympiad in Norway, was also awarded the gold medal for her unblemished record on board one.

Untitled Mariam Essa likewise posted a perfect record to claim the gold medal on board four for Dubai. Also contributing to Dubai’s medal haul were Shaima Noman, who won the silver medal on board two, and Woman Candidate Master Bashaer Khalil, who was awarded the board three bronze Medal.

The rest of the Dubai team members were Aysha Jehad, Alia Ali, Yasmin Ali, Mariam Essa and Hind Faraj. The competition allowed each team to field eight players, although only four players were allowed to play in each round.

“I credit this victory to solid team effort and the commitment of all members of the team,” said Nouman, who is a first-year engineering student at Sharjah University. “Our coaches did a great job of preparing the players for the tournament. With a few big events coming up, including the Dubai Chess Open next month, this championship serves as important morale-booster for me and my teammates.”

Najib Saleh, Head of Technical Committee of Dubai Chess and Culture Club, said, “This victory shows the importance of good preparation in any competition. Nouman’s solid performance on the top board was also very important for the team. She is currently the UAE’s most promising woman player and we are happy she continues to do well in local and international tournaments. Nouman’s steady progress as one of the UAE’s elite players is a testament to club’s commitment to produce athletes who will win accolades for the UAE on the global chess scene.”