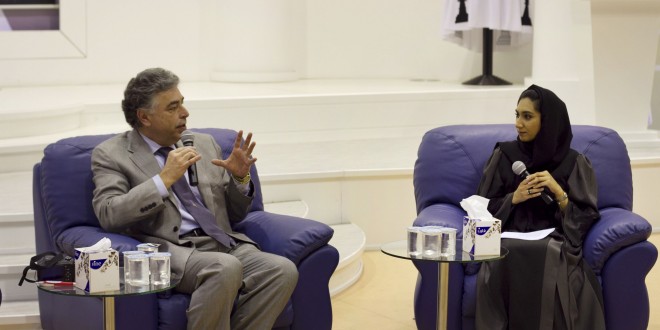 Four-time US chess champion Yasser Seirawan gave players, parents and chess coaches in Dubai a rare glimpse into the training regimen of elite chess professionals during a lecture at the Dubai Chess and Culture Club last Thursday. In his first visit to the emirate after nearly 30 years, the author and former editor of Inside Chess magazine also reminisced his heroic win over Garry Kasparov at the 1986 World Chess Olympiad in Dubai, which made him one of the few to defeat the Russian legend during his reign as world champion.

According to Najib Saleh, Head of Technical Committee, the free lecture was part of various activities being organised to complement the club’s training and development programme for students and coaches of its chess school. Seirawan’s visit was organised ahead of the 17th edition of the Dubai Open Chess Tournament on April 5-16, where many of the club’s players will be competing against an expected field of more than 50 grandmasters, international masters and other highly rated players from around the world.

“Organising master classes with top coaches and trainers is a key element in our programme,” said AbdulKareem Al Marzqouqi, Board Member. “Yasser Seirawan’s experience as one of the absolute best in the world definitely counts a lot in terms of passing on helpful advice and inspiring young players and coaches as well. His lecture was particularly valuable as many of the club’s members are currently preparing for the Dubai Open next month.”

Aside from giving practical advice to students and coaches, Seirawan also talked about new trends such as the use of computers in chess training.

“He had interesting insights about computer chess and how it is impacting the development of young players,” said Saeed Yousuf, Players Development Officer of the club.

In a separate meeting with club officials, Seirawan discussed his work on a new teaching manual that aims to help young players build a strong foundation in chess. “First of all it helps if you have a (player) base,” he said of efforts to promote chess in the grassroots, adding that a manual that is developed specifically for absolute beginners will be helpful in encouraging more young players to take up the sport. “If the base is large enough, then there are all sorts of things that you can do. You can have leagues, school events and things like that.”

He noted that most teaching manuals for beginners actually assume that students already have a certain degree of skill level and experience in playing. The new teaching manual he is working on tries to address a gap by providing more specific instructions for students who are absolute beginners.

Seirawan said the teaching manual will be downloadable for free, although it will take a few more weeks to complete the project. Coaches who will use the manual are also welcome to submit their suggestions, which will be used to improve future editions of the manual.

Yahya Mohammad , Development and Planning Manager of the club,“The teaching material that Yasser Seirawan is developing certainly addresses a certain gap in the way chess is taught in schools and clubs,” said Saleh. “His ideas complement our efforts to be more flexible in providing more tailored chess instruction, particularly among very young players and beginners.”

Seirawan’s lecture also featured some of his analysis on his famous win against Kasparov at the Dubai Olympiad – a victory that allowed the Americans to edge out the heavily favoured Soviet Union in the two teams’ individual match-up, although Kasparov’s side pulled off dramatic wins in the later rounds to ultimately win the championship.  “That was kind of a reliving of good old times,” said Seirawan, whose US team eventually settled for the bronze medal in the Dubai Olympiad, adding that “it was always special when I was playing against Kasparov”.

Seirawan, however, did put the win against Kasparov in perspective, saying “it was just a one-off match-up”. “There were these other moments like winning the World Junior Championship [in 1979] and winning the US championship that I wouldn’t trade for other ones.”