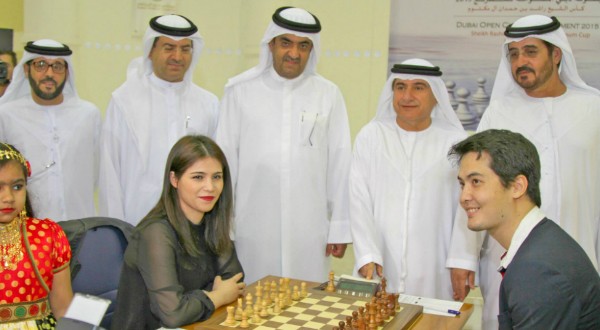 17th edition of the Dubai Open Chess Championship kicks off

Ibrahim Abdul Malik performed the ceremonial first move in the game between top-seeded English Grandmaster (GM) David Howell and Azerbaijan’s Khayala Abdullah to officially open the tournament, being held daily until April 14 at the Dubai Chess and Culture Club.

A total of 39 grandmasters are competing in the tournament, including 21 who are rated above 2600. There are also nine Woman Grandmasters (WGMs).

Dubai’s Fide Master (FM) Saeed Ishaq pulled off an emphatic win over ninth-seed GM Eltaj Safarli from Azerbaijan in a day that saw three other major upset victories. The 86th-seed Ishaq, a former national team player who is making a comeback after completing his engineering studies in the US, played an inspired attacking game as he sacrificed two pawns, a bishop and a rook in succession to rip open Safarli’s kingside defense. Safarli resigned on the 36th move as checkmate was inevitable.

The highest seed to concede a loss in the first round, however, was fifth-seed GM Yuriy Kuzubov of Azerbaijan, who fell to 82nd-seed Jobannie C. Tabada from the Philippines.

The rest of the seeded grandmasters, on the other hand, performed as expected with the top-seeded Howell outlasting Abdullah on the top board. Second-seed GM Vladimir Fedoseev of Russia defeated the promising Egyptian player Adham Fawzi, while third-seed GM Igor Kovalenko of Latvia outplayed India’s Deshpande Aniruddha.