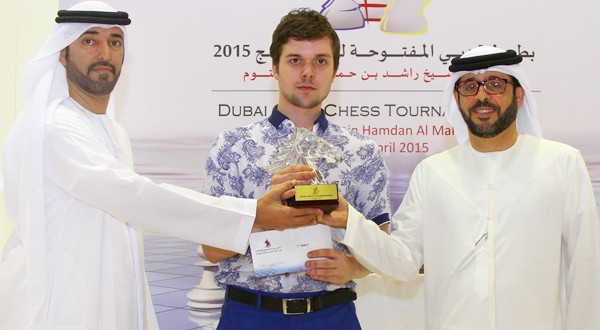 GM Gadir Guseinov of Azerbaijan took the second spot with 8.5 points after splitting the point with Ukraine’s Yuriy Kuzubov in the last round. Kuzubov settled for third on tiebreak after scoring eight points in a tie with three others. Round out the top six finishers who received cash prizes totaling US$4,000 were top-seed GM Igor Kovalenko of Latvia, Zhigalko and GM Tigran L. Petrosian of Armenia.

The UAE’s GM Salem AR Saleh finished 14th in a field of 76 participants from 30 countries, including 21 grandmasters and 11 international masters. He won the special prize as the top UAE player.

Ahmed Khalifa Al Thani, Vice President of the Dubai Chess and Culture Club, Jamal Al Abdouli, Secretary-General of the club, distributed the prizes to the winners. Khalifa Al Thani congratulated the winners and expressed his happiness for the high level of competition. He also expressed his appreciation to the club’s officials for working to provide excellent playing conditions each year.

The blitz tournament allotted each player three minutes plus a two-second increment per move to complete a game. The tournament witnessed a participation of 80 players representing 30 countries, 21 GrandMasters, and a total of 43 Master players.