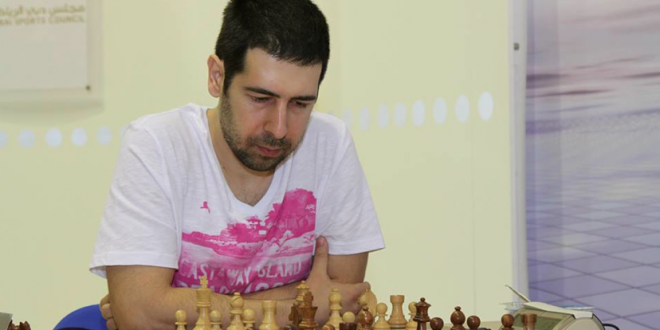 Coming into the final round with the highest tiebreak among the five eighth-round joint leaders, Solak only had to draw his final game and hope that none of his co-leaders would score more than a half point in the ninth round for him to win the title. That was exactly what happened as Solak, a Serbian who now represents Turkey, chose a low-risk strategy to the top prize with a 15-move draw by repetition of moves in his Ruy Lopez – Berlin Defence variation game against co-tournament leader GM Eltaj Safarli of Azerbaijan, while the three other joint leaders who were in a more combat mode could likewise do no more than a draw.

Solak finished the tournament with seven points in a tie with GM David Howell of England, GM Vladimir Fedoseev of Russia, GM Andrei Istratescu of France, GM Ivan Ivanisevic of Serbia and Safarli. The Turkish player won the tournament by virtue of a superior tiebreak score and will be awarded custody of Sheikh Rashid Bin Hamdan Al Maktoum Cup and a cash prize during the awarding ceremony to be held on Wednesday evening  (7:00 pm) at the club.

Unlike Solak, Howell, Fedoseev and GM Alexander Shabalov of the US, the other eighth-round joint leaders, elected to slug it out in their final-round matches, and it was the English player who had the best chance to win all the marbles.

In a classic final-round showdown between the top two seeds, Howell, the pre-tournament favourite and top-seed, methodically outplayed the second-seeded Fedoseev with the black side of a Queen’s Gambit Declined. With his two bishops influencing action on both sides of the board, Howell proceeded to win a pawn on the 38th move and then picked up a second pawn on the 43rd move. Desperate for counter-play, Fedoseev sacrificed two more pawns to create back-rank mating threats with his advanced e6-pawn and knight on the f5-square cutting off the exit route of Howell’s king.

Howell failed to react precisely to maintain his advantage as he chose to attack white’s e6-pawn with his rook on the 50th move, instead of moving his king out of harm’s way via a flight square on d8 to the queenside. Fedoseev quickly pounced on the opportunity by attacking black’s king with his rook from an entry point on the h-file, at which point computer analysis showed Howell’s advantage had all but dissipated, as the Russian’s counter-attack was enough to force Howell to repeat moves to avoid getting checkmated. A draw was thus agreed on the 55th move.

Shabalov, on the other hand, was outplayed by Serbia’s GM Ivan Ivanisevic, who was among a chasing pack of six-pointers entering the final round, in a Grunfeld Defence. A tactical blow allowed the Serbian to win a pawn on the 25th move, but the four-time US champion Shabalov fought back, allocating considerable time and resources to win white’s a-pawn and create a potentially dangerous passed pawn. But this left Shabalov’s king highly vulnerable, which Ivanisevic capitalised on to launch a decisive mating attack with his rooks.

Howell settled for the runner-up honours, while Fedoseev finished third. Istratescu, who moved up to seven points with a win over Turkey’s GM Alexander Ipatov, was fourth followed by Ivanisevic and Safarli. Shabalov was seventh with 6.5 points. Rounding out the top 15 finishers who will receive cash prizes are GM Nils Grandelius of Sweden, International Master (IM) Zaur Mammadov of Azerbaijan, GM Alexandr Fier of Brazil, GM Aleksandr Shimanov of Russia, GM Aleksandr Rakhmanov of Russia, GM Gadir Guseinov of Azerbaijan, GM Igor Kovalenko of Latvia and GM Yuri Solodovnichenko of Ukraine.

Taking top honours as best Emirati is ace junior Ahmed Fareed, who scored five points despite a loss in the final round to Armenia’s IM Tigran Harutyunian. Fide Master (FM) Saeed Ishaq is second with 4.5 points and Hamdan Marshool third with four points.

The top player in the under-2300 rating category was Deshpande Aniruddha from India, followed by Rajarishi Karthi also of India and Soozankar A.M from Iran.