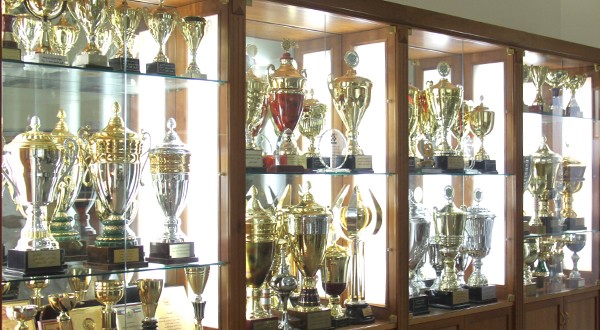 Dubai Chess and Culture Club highlighted its important contributions to the chess world as it marked its 34th founding anniversary today. The club was officially recognized as the chess governing body of Dubai on May 16, 1981, responsible for promoting the sport in the emirate and for training and developing Dubai’s top chess talents and official representatives to national and international competitions.

Some of the most significant contributions of the club to the chess world include the introduction of the rapid system by the club’s former chairman and former UAE Chess Federation Mohamed Ghobash while he was FIDE vice-president. Rapid chess is now one of the official events in the World Chess Federation’s (FIDE) annual calendar and has its own international rating list. The club has subsequently hosted a number of topflight international rapid chess events, including the Dubai Rapid Grand Prix and the World Rapid and Blitz Chess Championships June 2014, which was won by Norwegian world champion Magnus Carlsen ahead of the strongest cast of participants ever assembled for such a competition.

The club also played a major role in organising the 27th World Chess Olympiad hosted by the UAE Chess Federation and held in Dubai in 1986, bringing the most prestigious international chess team competition to the region for the first time. The Olympiad was then the biggest sporting competition hosted by Dubai, paving the way for the emirate to host and organise many other international sporting events in succeeding years. Described by participants as the best organised Olympiad, the Dubai Olympiad featured a number of other milestones, including the first time the event gathered more than 100 countries since its inaugural edition in 1927.

Aside from hosting world championships, the club organises the annual Dubai Open, which is considered one of the strongest open tournaments in the world, and various Arab championships, including this month’s Arab Elite Championship.

The club has also been a catalyst in promoting chess in Asia, playing an important role in revitalising the Asian Cities Team Chess Championship.

“We take great pride in Dubai Chess and Culture Club’s rich history as the UAE’s pioneering organisation in chess and its important contributions in the development of the sport globally,” said Ibrahim Al Bannai, the club’s Chairman. “The milestones we have achieved through the years serve as an inspiration for us to continue to break new ground and strengthen Dubai’s position as a global chess hub.”

Dubai Chess and Culture Club ignited a nationwide frenzy in chess in the early 1980s following the unprecedented exploits of International Master (IM) Saeed Saeed Ahmed, who became the first and only UAE player to win a world championship. Dubbed by the media as the “Arab computer” because of his ground-breaking achievements in the global chess arena, Ahmed won the Under-14 title in the 1981 World Youth Championship in Xalapa, Mexico, and subsequently became the first Emirati player to earn the IM title.

Dubai also holds the distinction of producing the UAE’s first chess grandmaster, Taleb Moussa, who like Ahmed reigned as Arab and Asian Zonal champion. The club has also nurtured some of the top achievers in women’s chess competitions, including by Woman International Master (WIM) Amna Nouman, the champion of Arab girls under 20 years.Dubai Chess and Culture Club has produced 96 podium finishes, including 30 gold medals, in various Arab, Asian, World and Olympic individual and team chess championships.

GM Taleb Moussa and FM Saeed Ishaq hold the distinction of having won the most number of medals while representing the UAE in international competitions, each with nine, followed by IM Saeed Ahmad Saeed with eight medals. All key international achievements since the establishment of the club are posted on the club’s website, www.dubaichess.ae.

In addition, the club has also produced distinguished personalities in the field of chess officiating and organisation, including International Arbiter Mahdi Abdul Rahim, who was recently awarded the Sheikh Mohamed Bin Rashid Al Maktoum award for being the first Arab nominated by FIDE as Chief Arbiter of the World Rapid and Blitz Championships. Furthermore, the club has produced three International Organisers sanctioned by FIDE: Mahdi Abdulrahim, Najeeb Saleh and Yahya Mohamed Saleh.

“The club has produced some of the Arab world’s finest players through its chess school, including a new generation of women players who have recently won the national team championship for Dubai. Concurrently, we also focus on developing a new generation of leaders who will carry forward our vision of chess excellence,” said Al Bannai. “We are therefore very pleased to see some of our former top students such as Yahya Mohamed Saleh and International Arbiter Saeed Yousuf transition into capable leaders. We will need dedicated and committed young people like them to bring to fruition the long-term strategic plans and initiatives we have laid out for chess in Dubai.”