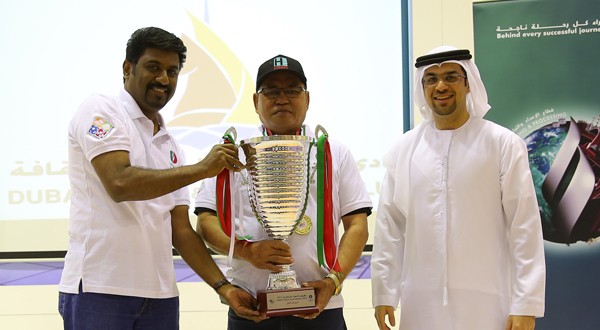 Danilo Torres tallied eight points in nine games to rule the Enoc Chess Tournament, a full point ahead of his nearest pursuer. Torres defeated Hasan Ali in the final round to complete his domination of the event held at the Dubai Chess and Culture Club for employees of Emirates National Oil Company.

After winning six straight games, Torres was derailed by a loss to Ahmed Malik in the seventh round, but he struck back immediately with back-to-back wins to complete his championship run.

Ayman Ismail took the runner-up honors with seven points after defeating Rayees  Hasan in the final round.  Hasan and Malik finished third and fourth respectively with six points apiece, while Ali was fifth with five points.

The tournament was played under active chess format with each player allotted 10 minutes plus a 10-second increment per move to complete a game. International Arbiter Saeed Yousuf Shakari served as the tournament’s chief arbiter.

Tournament director Yahya Mohammed Saleh, the Planning and Development Manager of Dubai Chess and Culture Club, said the one-day event was part of the club’s efforts to promote chess among different organisations and companies in Dubai.

“Chess is an excellent way to promote camaraderie among employees and it also helps improve one’s ability to concentrate and make strategic decisions,” said Saleh. “There was a very enthusiastic response to this event and we look forward to continue working with Enoc and other companies to promote chess in their organisations.”