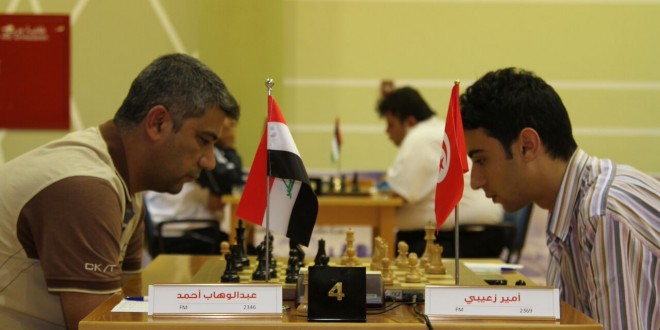 Joint leaders Grandmaster (GM) Bassem Amin of Egypt and GM Mohammed Al-Sayed of Qatar overpowered their closest pursuers to increase their lead after Saturday night’s fifth round of the 3rd Arab Elite Chess Championship – Kirsan Ilyumzhinov Cup, the most prestigious individual chess tournament in the region, at the Sheikh Saeed Bin Hamdan Al Maktoum Hall of the Dubai Chess and Culture Club.

The top-seeded Amin conquered the Sicilian Defence – Najdorf variation of the UAE’s Fide Master (FM) Saeed Ishaq in 32 moves. The Emirati player, who is looking for a GM norm in this event, declined an offer to win the Egyptian’s rook for a knight on the 16th move, fearing a swift counterattack by Amin’s more active pieces on both sides of the board.

However, Amin’s energetic play eventually forced Ishaq to accept the unsolicited gift four moves later albeit in an even more unfavourable circumstance as all of white’s forces were already poised for the offensive. A tactical sequence then allowed Amin to convert his positional edge to a winning material advantage.

The third-seeded Al-Sayed needed 41 moves to overcome International Master (IM) Basheer Al Qudaimi of Yemen in another Sicilian Najdorf encounter. Orchestrating the offensive from the black side of the board, Al-Sayed pushed his d-pawn to the d5-square on the 13th move to punish white’s lacklustre opening play and wrest the initiative.

A series of piece exchanges left white with a weak pawn on c3, and although Al Qudaimi was still holding on, an over ambitious pawn capture on the 23rd move weakened the Yemeni’s h and f pawns and gave Al-Sayed new targets on the kingside. Al-Sayed penetrated white’s fortress with his queen on the 30th move and sealed the win with a tactical flurry shortly thereafter.

On the third board, the second-seed GM Salem AR Saleh of the UAE continued his pursuit of the leaders with a 51-move win over GM Mohamed Haddouche in yet another Sicilian slugfest. Saleh upped his total to 3.5 points, a full point behind Amin and Al-Sayed. Also with 3.5 points is Tunisia’s FM Amir Zaibi, who defeated Iraq’s FM Ahmed Abdulsattar Abdulwahhab.

A much-awaited encounter between the top two seeds will unfold in Sunday’s sixth round as Saleh takes on Amin at the top board. On second board, Al-Sayed will be the heavy favourite against the seventh-seeded Zaibi.

Meanwhile, Ahmed Khalifa Al Thani, Secretary-General of the Arab Chess Federation, assured that the Arab Elite Chess Championship – Kirsan Ilyumzhinov Cup will continue to be held every two years in accordance with an agreement with International Chess Federation (Fide) President Kirsan Ilyumzhinov. Al Thani also revealed plans to organise a similar event for women Arab players. He also noted that the event aims to promote unity in the Arab region as he thanked the 15 countries that sent their best players to compete in the championship.

Al Thani said the Arab Chess Federation will support tournaments organised by different Arab countries, including an event that is expected to be held in Morocco in October.