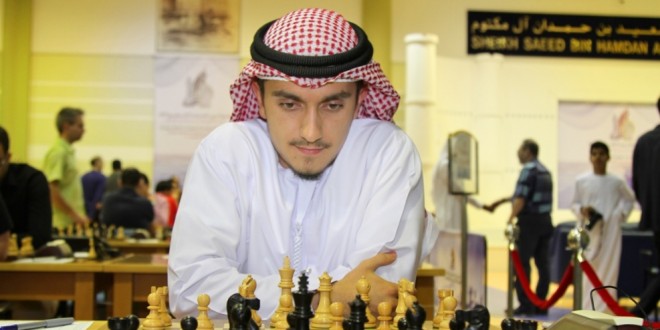 Fide Master Saeed Ishaq scored the round’s biggest upset when he outplayed fourth-seeded Algerian Grandmaster (GM) Mohamed Haddouche to move within half a point of the leaders after the fourth round of the 3rd Arab Elite Chess Championship – Kirsan Ilyumzhinov Cup, the most prestigious individual chess tournament in the region, Friday night at the Sheikh Saeed Bin Hamdan Al Maktoum Hall of Dubai Chess and Culture Club.

Ishaq, who is in search of a GM norm at the event, deployed the Sicilian Defence in a 43-move win over the Algerian, who embarked on a dubious queen hunt that ultimately backfired in the face of the tenth-seeded UAE player’s well-coordinated and more active pieces. Haddouche sacrificed two pawns to lure Ishaq’s queen into the white lair, but the Algerian underestimated the activity of black’s pieces in a forced line that resulted in black giving up his queen for a rook, knight and three pawns.

The Emirati’s tight central grip and more active pieces eventually decided the outcome as Haddouche was unable to prevent black’s e and d pawns from rolling down the centre. Ishaq, who plays for the Dubai Chess and Culture Club, hiked his tally to three points, half a point behind joint leaders GM Bassem Amin of Egypt and GM Mohammed Al-Sayed of Qatar, who had a less eventful fourth-round encounter that ended in a draw in 30 moves.

Also with three points is International Master (IM) Basheer Al Qudaimi, who is part of the coaching staff of the Dubai Chess and Culture Club. Al Qudaimi repulsed the Bishop Opening of Iraq’s FM Ahmed Abdulsattar Abdulwahhab with a crushing king-side attack to win in 32 moves.

Second-seed GM Salem AR Saleh of the UAE moved up to joint fifth and sixth with 2.5 points after a clinical win over Candidate Master (CM) Ahmed Abuzied of Sudan. The game lasted 80 moves, although the Emirati already had a winning position as early as move 20. FM Amir Zaibi of Tunisia also has 2.5 points after being gifted a point by Moroccan IM Abdelaziz Onkoud, who had built a huge winning advantage in an English Opening encounter until a fatal blunder on the 45th move handed all the trumps to the Tunisian player, forcing Onkoud to resign seven moves later.

Ishaq will go up against Amin, while Al Qudaimi will take on Al-Sayed at the top two boards in the fifth round. Saleh will meet Haddouche on board three.

FM Ayyad Husain of Bahrain leads a group of two-pointers after he took down the other IM in the tournament, Jordanian Sami Khader, who resigned on the 36th move after being completely outplayed in the middlegame of a Modern Benoni Defence.

Other results saw Ali Shamas Salim Issa of Oman score his first win in the tournament, beating FM Ali A. Elmejbri of Libya in a protracted encounter wherein the Libyan threw away a sizeable advantage in the endgame and then pushed his luck too far trying to win an otherwise drawish position. Issa, who now has 1.5 points, won in 89 moves.

Meanwhile, International Chess Federation (Fide) President Kirsan Ilyumzhinov has confirmed his attendance at the closing ceremony on Wednesday to award the prizes to the winners. He will be joined by Fide Deputy President Georgios Makropoulos and Fide CEO Jeffrey Borg.