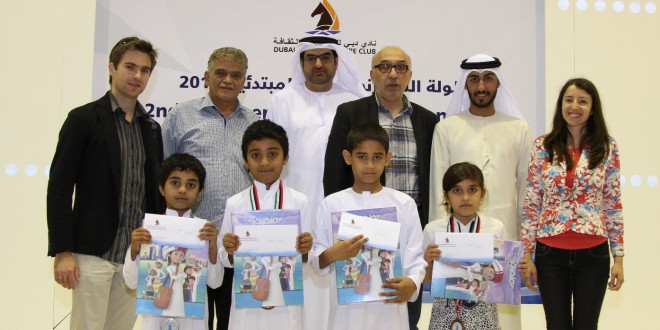 Atharv Pramod and Aaditya Hari Krishnan, both of India, won all their matches to dominate their respective divisions in the 2nd Beginners Tournament, which concluded on Saturday at Dubai Chess and Culture Club. Atharv ruled the Under-12 age category with a perfect nine-out-of-nine score, while Aaditya likewise posted nine points to claim the Under-8 age category.

The Under-10 age category, on the other hand, saw a more exciting two-way tussle for the championship between the UAE’s Zayed Sultan Al Taher and India’s Mridul Ashokan, which was ultimately decided in the final round. Both players drew their match in the fifth round and won the rest of their games to enter the final round with identical 7.5 points.

Ashokan won his final match against the much lower-ranked Abel Jaison, while Al Taher’s winning streak was halted by his compatriot and eventual fourth-placer Abdalla Yahya Alhammadi, allowing Ashokan to win the title with a near-perfect 8.5 points. Al Taher, however, had won enough points to bag the silver medal despite the final-round loss.

Russia’s Denis Zemtsov placed second in the Under-12 category with seven points, while the UAE’s Khalifa Essa Al Blooshi was third with 6.5 points. India’s Kinshuk Phalke and Pranav Chandrasekhar rounded out the top five players with six points apiece.

Abudlkareem Al Marzouqi, Board member at Dubai Chess Club, and GrandMaster Elmar Mageramov awarded the winners in a simple celebration attended by family members and coaches from other chess clubs. The winner in each category was awarded a champion’s cup and a gold medal, while the second and third placers received silver and bronze medals. All top five finishers of each category were also awarded cash prizes.
“The tournament was open to all nationalities and was part of Dubai Chess and Culture Club’s programme to promote chess among students in Dubai. We had over 100 participants from 11 countries” said Cheif Arbiter and organizer Saeed Yousef.

The tournament is a nine-round Swiss system event with each player allotted 35 minutes plus a 10-second increment per move to complete the game.