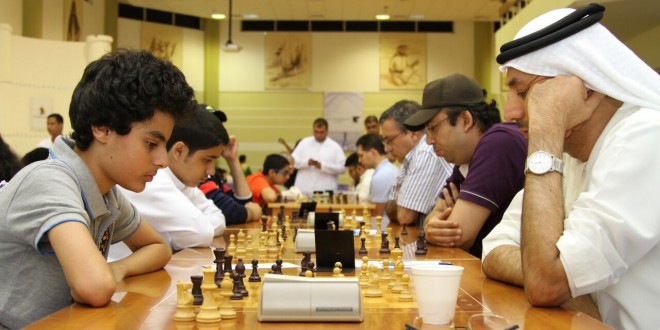 Dubai, UAE – Only eight players, including five grandmasters (GM), remain with perfect scores after four rounds of the 12th Allegiance to Zayed Chess Tournament at the Sheikh Saeed Bin Hamdan Bin Rashid hall of the Dubai Chess and Culture Club.

Top-seed GM Ivan Sokolov from the Netherlands and the UAE’s second-seed GM Salem A.R. Saleh won both of their matches in the third and fourth rounds Monday night to maintain immaculate four-point slates along with third-seed GM Victor Moskalenko of Spain, and Azerbaijan’s fifth-seed GM Elmar Magerramov and sixth-seed GM Ulvi Bajarani.

Fourth-seed GM Davorin Kuljasevic of Croatia, however, failed to show up for both his matches because of an illness, and remains at two points. However, he is expected to return to action for Tuesday night’s rounds five and six.

Against some of Dubai’s top non-masters in the fourth round, the grandmasters continue to manifest their dominance in the event as Sokolov disposed of 18th-seed Marvin Marcos of the Philippines, while Saleh outplayed 19th-seed Fide Master (FM) Antonio Molina Sr. also of the Philippines. Moskalenko won over 24th-seed Candidate Master (CM) Haridas K. of India, Magerramov defeated Mohammed Ahmed Boshara of Sudan and Bajarani beat 21st-seed Ernesto Yap of the Philippines.

Dubai Chess and Culture Club’s FM Nabil Saleh, the eleventh seed, also has four points with a win over India’s Samyuktha Harikrishnan in the fourth round. Seventh-seed Talal Hilwani and 14th-seed Abdul Kader Raes, both of Syria, complete the cast of leaders following wins over Dubai standout Aysha Jehad and Saleem Shalol Hesham of Iraq respectively.

The fifth round will see the tournament’s first all-grandmaster match as Sokolov faces off with Bajarani at the top board. Salem Saleh will take on Hilwani, Moskalenko is paired with Nabil Saleh and Magerramov will play Raes.

Five players trail the leaders with 3.5 points each, led by ninth-seed International Master (IM) Mehrshad Sharif of France, who rebounded from a second-round draw with two straight wins. FM Abdo Somoff, the 27th-seed from Lebanon who upset Egyptian eighth-seed IM Ali Farahat in the third round, and Russian 10th-seed FM Roman Zemtsov drew their fourth-round match to likewise tally 3.5 points each. Indian junior player Anusweud Sasikumar held the UAE’s Woman International Master (WIM) Nora Saleh to a draw to also post 3.5 points. Nora Saleh has three points to share the 14th to 47th places with a host of other players.

Russian 15th-seed Sergey Ermachkov won over India’s Devnani Kush in the fourth round to complete the chasing pack of 3.5-pointers.

The nine-round Swiss system tournament will run until June 25 with two games on each playing date from 10.30pm. Each player is allotted 15 minutes plus a three-second increment per move to complete a game. International Arbiter (IA) Saeed Yousuf Shakari is the tournament director, while IA Mahdi Abdulrahim is the chief arbiter.