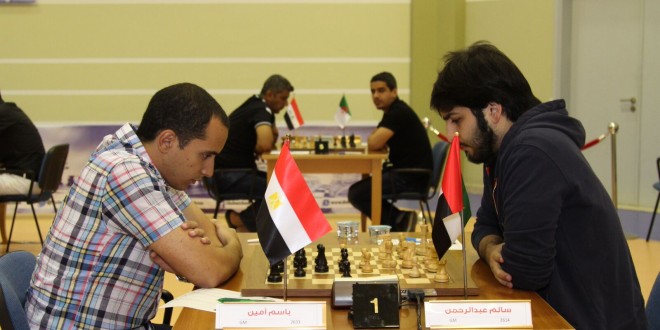 The UAE’s Grandmaster (GM) Salem AR Saleh strengthened his bid to become the first player to win a second title at the Arab Elite Chess Championship – Kirsan Ilyumzhinov Cup when he defeated erstwhile leader GM Bassem Amin of Egypt in the sixth round Sunday night at the Sheikh Saeed Bin Hamdan Al Maktoum Hall of the Dubai Chess and Culture Club.

Saleh dismantled Amin’s Bogo-Indian Defence in 35 moves in a much-awaited meeting between the top two seeds of the third edition of the region’s most prestigious individual chess tournament. In an inspired play before his hometown supporters, the second-seeded Emirati sacrificed his d-pawn on move 13 to give his pieces wider scope on both sides of the board and immediately followed this up with a sneaky bishop move to a4 to disrupt Amin’s queenside development. Three moves later Saleh deployed the other bishop to the h6-square in a deadly piece sacrifice that the Egyptian prudently declined, although at the cost of creating irreparable kingside weaknesses.

Winner of the inaugural edition of this event in 2011, Saleh then launched a full-scale attack by move 20, and this time the two knights took the lead, landing one after the other on the g5 and h5 squares – the latter another piece sacrifice, which the Egyptian again had to refuse to avoid immediate defeat. The outcome, however, was already beyond doubt as Saleh invaded black’s seventh rank to deliver the coup de grâce.

After being derailed by a draw and loss in the second and third rounds, Saleh has now won his third consecutive point and raised his tally to 4.5 points in a tie with Amin.Standing in the way of the UAE player’s bid for a second crown at the Arab Elite is third-seed GM Mohammed Al-Sayed of Qatar, who now leads the tournament alone by a full point following a 51-move win over FM Amir Zaibi of Tunisia. Al-Sayed methodically exploited Zaibi’s faulty handling of the black side of a Queen’s Gambit Declined, winning a pawn without any compensation on the 21st move and then creating dangerous passed pawns on the a and c files.

Zaibi sacrificed a bishop on the 27th move in a last-ditch effort to complicate matters. Al-Sayed failed to react optimally, allowing the Tunisian to win back the pawn and eliminate the Qatari’s advanced pawn on c6. However, Al-Sayed’s more active pieces and outside passed pawn on the a-file proved more than enough to grind out a win in the endgame.

Having lost to Al-Sayed in the third round, Saleh’s chances of winning a second championship will now partly depend on the Qatari’s performance in the final stretch of the event.

Saleh takes on International Master (IM) Basheer Al Qudaimi of Yemen in the seventh round. Al-Sayed, who is looking to keep the Kirsan Ilyumzhinov Cup in Qatar following compatriot Mohammed Al-Mohdiaki’s win in the second edition in 2013, will take on Saleh’s compatriot FM Saeed Ishaq. Amin will be up against Zaibi.

Saeed Ishaq, from the UAE, won against FM Husain Ayyad for his fourth point and remains in the hunt for the top prizes and a possible GM norm. Al Qudaimi, drew his game with Moroccan IM Abdelaziz Onkoud.