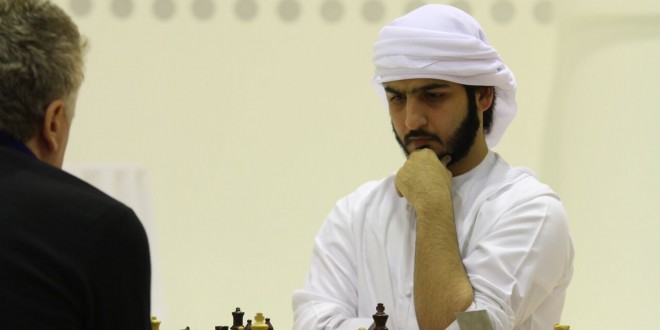 Seven others – four GMs, an IM and two untitled players – have a chance to win or tie for the championship depending on Thursday night’s final-round results

Dubai, UAE – The UAE’s Grandmaster (GM) Salem A.R. Saleh remained at the top of the standings going into the final round as he outplayed third-seed GM Victor Moskalenko of Spain in the seventh round and then settled for a draw with his coach, top-seed GM Ivan Sokolov of the Netherlands, in the eighth round Wednesday night at the 12th Allegiance to Zayed Chess Tournament at the Sheikh Saeed Bin Hamdan Bin Rashid hall of the Dubai Chess and Culture Club.

Saleh, seeded second in the tournament, has 7.5 points and maintains a slim half-point lead over his nearest pursuers. He takes on sixth-seed GM Ulvi Bajarani of Azerbaijan in the ninth round Thursday night.

Fifth-seed GM Elmar Magerramov of Azerbaijan, one of the instructors at the Dubai Chess and Culture Club’s chess school, and seventh-seed Talal Hilwani of Syria are at joint second and third places with seven points apiece. Magerramov defeated his compatriot Bajarani in the seventh round and then won over Fide Master (FM) Antonio Molina in the eighth, while Hilwani scored victories over Mahmoud Haitham of Sudan and his compatriot Abdul Kader Raes to stay in contention for the championship trophy.

Sokolov, who also serves as the UAE national team coach, Moskalenko and Bajarani and two others occupy the third rung of the standings with 6.5 points each. Sokolov won his seventh-round match with Indian outlier Manjunath J. before the truce with Saleh, while Moskalenko and Bajarani rebounded from their setback in the seventh round with wins over tenth-seed FM Roman Zemtsov and the UAE’s 12th-seed Candidate Master (CM) Najib Saleh respectively.

Tabada defeated UAE youth standout Marshool Hamdan in the seventh round and then dropped the upset ax on eight-seed IM Ali Farahat of Egypt.

On Thursday night’s final round, Magerramov takes on Hilwani on second board, Sokolov faces Sharif on third board and Moskalenko takes on Tabada. All players at the top four board encounters have a chance to either win or tie for the championship depending on the final-round results.

The nine-round Swiss system tournament will run until June 25 with two games on each playing date from 10.30pm except on the last day, which will only have one game to be followed by the awarding ceremony. Each player is allotted 15 minutes plus a three-second increment per move to complete a game. International Arbiter (IA) Saeed Yousuf Shakari is the tournament director, while IA Mahdi Abdulrahim is the chief arbiter.