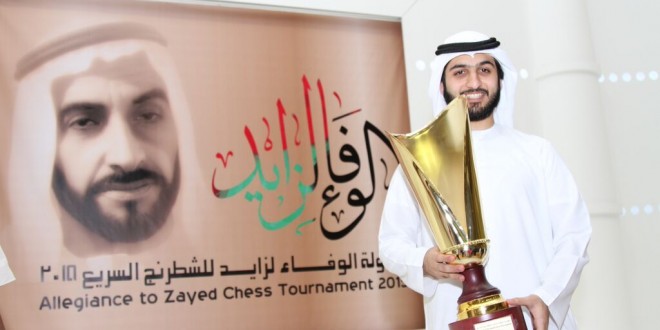 First Emirati to win the championship in 12 years

Dubai, UAE – The UAE’s Grandmaster (GM) Salem A.R. Saleh reaffirmed his place among the world’s elite grandmasters after winning the 12th Allegiance to Zayed Chess Tournament at the Sheikh Saeed Bin Hamdan Bin Rashid hall of the Dubai Chess and Culture Club. Saleh, seeded second in the tournament, only needed a draw with sixth-seed GM Ulvi Bajarani of Azerbaijan in the final round to seal his claim to the championship with eight points.

Saleh, the first Emirati to win the 12-year-old tournament, received his prize from Ahmed Khalifa Al Thani, Secretary General of the Arab Chess Federation and Vice-Chairman of the Dubai Chess and Culture Club, and Jamal Al Abdooli, General Secretary of the club. The awarding ceremony was held right after the final round on Thursday.

Four players had 7.5 points each to tie for the second to fifth places. Fifth-seed GM Elmar Magerramov of Azerbaijan, one of the instructors at the Dubai Chess and Culture Club chess school, had the best tiebreak score to claim the second-place prize, followed by third-seed GM Viktor Moskalenko of Spain, seventh-seed Talal Hilwani of Syria and top-seed GM Ivan Sokolov of the Netherlands.

Magerramov drew his match with Talal, while Sokolov, who is the UAE national team coach, outlasted ninth-seed International Master (IM) Mehrshad Sharif of France. Moskalenko escaped the upset ax against 13th-seed Jobannie C. Tabada of the Philippines after the Filipino misplayed a strategically won position and then missed a simple tactical sequence by the Spaniard to concede the point.

Mehrshad and Tabada remained at 6.5 points to share 13th to 18th places. Abdulwahab Abdulla from Ajman received the award as the best UAE player, whle Aysha Jehad won the top UAE lady award. Abdullah Ali and the Yasmin Ali also received awards for being the top male and female from Dubai Chess and Culture Club.

Ahmed Khalifa Al Thani said Salem Saleh’s record as the first Emirati to win the championship underlines the significant strides of the UAE in its chess program. Moreover, he said Saleh’s excellent performance will further invigorate the local chess scene and inspire the UAE’s up-and-coming players to excel in the sport.

He said the tournament has been organized for the past 12 years in honor of the late Sheikh Zayed Bin Sultan Al Nahyan, the Founding President of the UAE, and will thus remain one of the elite chess tournaments organized during Ramadan. He also thanked the various institutions that have supported the event through the years, including the UAE Chess Federation.

The nine-round Swiss system tournament allowed each player 15 minutes plus a three-second increment per move to complete a game. International Arbiter (IA) Saeed Yousuf Shakari was the tournament director, while IA Mahdi Abdulrahim was the chief arbiter. A total of 181 players signed up for the tournament.