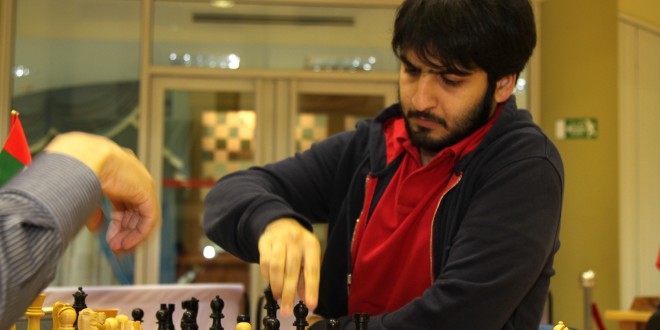 Saleh is the only player to remain with a perfect score of six points in as many rounds and will next meet third-seed GM Victor Moskalenko of Spain in round seven. Mosklaenko and and Azerbaijan’s GM Ulvi Bajarani drew their sixth-round match to occupy joint second to third places with 5.5 points each. Bajarani earlier toppled top-seed GM Ivan Sokolov from the Netherlands in the fifth round, while Moskalenko won over the UAE’s Fide Master (FM) Nabil Saleh.

Sokolov, who rebounded with a victory over 34th-seed Sasikumar Anusweud in the sixth round, and Magerramov, who earlier won over 14th-seed Syrian Abdul Kader Raes in the fifth round, are among ten players at the third rung of the leaderboard with five points apiece. Magerramov will play his youthful compatriot Bajarani in the other all-GM encounter on second board in the seventh round, while Sokolov will be up against India’s 26th-seed Manjunath J.

Croatian fourth-seed GM Davorin Kuljasevic, meanwhile, had to withdraw from the tournament for health reasons. The nine-round Swiss system tournament will run until June 25 with two games on each playing date from 10.30pm. Each player is allotted 15 minutes plus a three-second increment per move to complete a game. International Arbiter (IA) Saeed Yousuf Shakari is the tournament director, while IA Mahdi Abdulrahim is the chief arbiter.