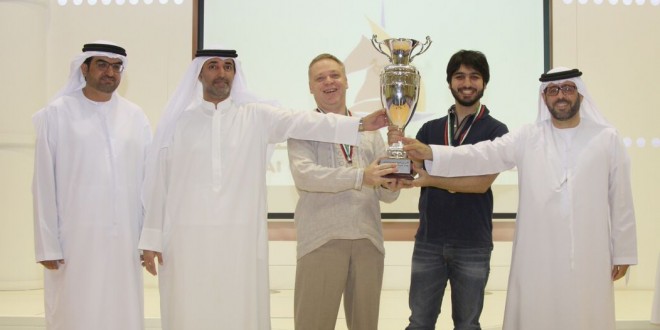 Dubai, UAE – Grandmaster (GM) Salem A.R. Saleh of the UAE and GM Dimitri Komarov of Ukraine, playing under “Sharjah 1”, completed a rare sweep of all their matches to reign supreme in the Dubai Cup Blitz Team Chess Tournament 2015 at the Dubai Chess and Culture Club.

The top-seeded GM tandem punctuated their dominance with a 2-0 shutout of Abu Dhabi’s Candidate Master (CM) Abdulla Kashwani Faisal and Ali Al-Hamed Zayed in Monday night’s ninth round to post a perfect score of 18 points.

The second-seeded Arab Union struggled for a 1-1 standoff with 11th-seed Team Reef in the final round to claim the runner-up trophy by the slimmest of margins. Arab Union’s International Master (IM) Basheer Al Qudaimi of Yemen and Talal Hilwani of Syria were both under severe pressure in their games against Team Reef’s Filipino players Francis Erwin Dimarucut and Marvin Marcos respectively, but Hilwani managed to pull off a win as Al Qudaimi dropped the point.

The tournament was part of Dubai Chess and Culture Club’s ongoing activities to commemorate the Holy Month of Ramadan. Each team was allowed up to three players, but only two could play in each round. A record 52 teams representing 17 countries competed in the two-day event.