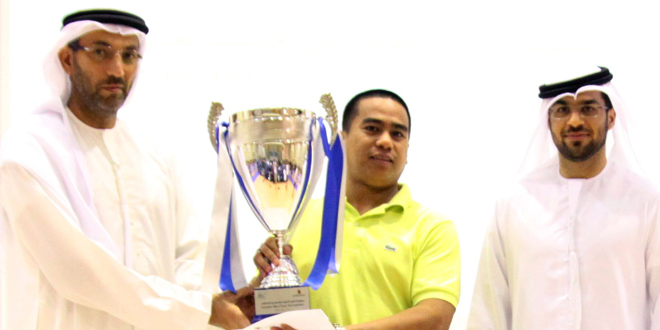 Marvin Marcos dominated the field to rule the Fide-rated blitz chess tournament organized by Dubai Chess and Culture Club on Friday (October 9). Seeded tenth at the start of the event, the Dubai-based Filipino chef scored ten points on nine wins and two draws in the 11-round Swiss system event to claim the champion’s cup over a field of nearly 100 players.

The host club’s Candidate Master (CM) Najeeb Saleh scored just two points after four rounds, but overcame the slow start to win all his remaining matches and claim runner-up honors with nine points. Saleh outplayed Joseph Galindo of the Philippines in the final round.

Wael Abdelghani from Egypt upset second-seed Fide Master (FM) Othman Moussa in the final round to up his tally to 8.5 points and claim third place. Galindo, who along with Marcos is a member of the Dubai-based Filipino Chess Players League-UAE, also had 8.5 points but was relegated to fourth with an inferior tiebreak score.

“The tournament had an amazing turnout with 100 players from different clubs sending their best players. This is a very positive response to our efforts to promote chess across the emirate, particularly among the youth,” said Mohamed El Husseiny, Executive Director. “These tournaments also serve as an important training ground for the club’s chess school, while helping us identify and nurture promising talents.”

Players from more than a dozen countries took part in the tournament, which was part of the club’s series of monthly activities that are open to all nationalities. Dubai Chess and Culture Club has recently opened its membership to non-UAE nationals as it seeks to provide all chess enthusiasts in the emirate better access to world-class resources and specialised training under renowned international grandmasters and top coaches.