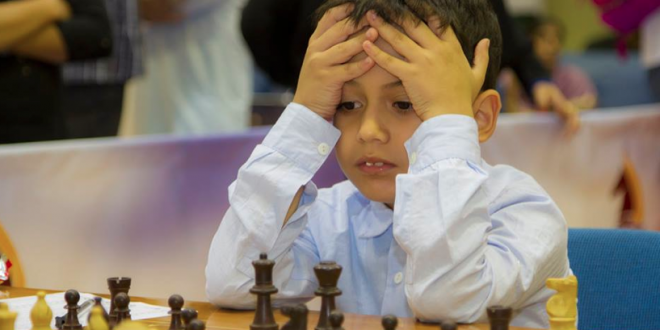 Emirati kiddie player Darmaki Latifah led the winners at the third edition of the Dubai Chess and Culture Club’s Beginners Chess Tournament 2015, which concluded Saturday with a record number of participants. Latifah, representing the host club, won the gold medal in the Under-10 age category after tallying six points in seven rounds, outclassing 43 other contenders from different countries.
Russia’s Aleksandr Lutsenko and India’s Gowtham Ramamoorthy were also awarded gold medals after ruling the Under-12 and Under-8 age categories.
According to (Najib Saleh , Head of Technical Committee), the tournament gathered nearly 120 players competing in three age divisions, the biggest number of participants since the series was inaugurated earlier this year as part of the club’s grassroots development program.
“In just our third edition of organising the beginners’ tournament, there has been a huge improvement in the number of participants,” said (Saleh). “This manifests the strong interest among parents and schools to use chess as a tool for child development, particularly in enhancing a child’s analytical skills and strategic thinking. With Dubai Chess and Culture Club’s continuing program to promote chess, we expect several more new faces as we organise more competitions and events for the youth.”
Starting the competition as the eight-seed, Latifah edged out fellow six-pointers Mridul Ashokan of India and fellow Emirati Mariam Faraj with the best tiebreak score to claim the top prize. Ashokan and Faraj settled for the second and third places, while Yatrik Pratihar of India and Al Mazrouei Jumaa Mohhamed of the UAE completed the top five placers.

Lutsenko also won the Under-12 championship on tiebreak after he ended up in a two-way tie with eventual runner-up Pranav of India with six points apiece in seven games. India’s Karthik Praveen, Russia’s Denis Zemtsov and the UAE’s Sultan Amer rounded up the third to fifth places respectively,
Ramamoorthy had an easier route to the championship, posting an unblemished seven-point output to top the Under-8 division. UAE players dominated the rest of the top five standings with Shamsa Amer and Jumah Mohamed Jumah securing the silver and bronze medals respectively. Mansoor Khaled Saqr and Hamad Essa Al-Blooshi settled for fourth and fifth respectively.

“We are even more impressed with the turnout in the Under-8 division, which had nearly 60 players,” said (Saleh). “This means that more and more youngsters are taking up the sport. The Dubai Chess and Culture Club’s recent move to open membership to expats has been a very big factor in encouraging more players to take up chess as they now have the opportunity to train with world-class trainers and international grandmasters and use the club’s top-of-the-line training facilities.”