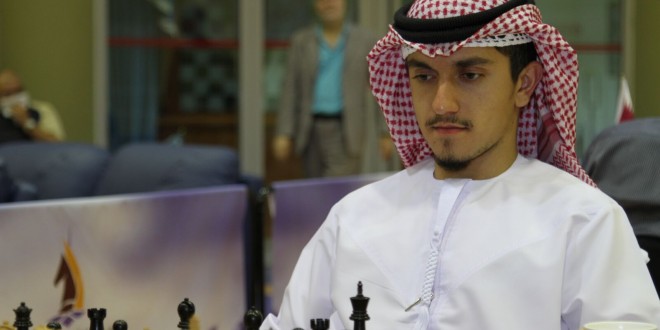 Dubai, UAE (November 22, 2015) – Fide Master (FM) Saeed Ishaq continued one of the most amazing comebacks in UAE chess history after winning the UAE President’s Cup last Saturday, securing his third major championship of the year. Ishaq had a near-perfect score of 6.5 points in seven rounds against the top players from other emirates to bring home the President’s Cup.

Dubai Chess and Culture Club stalwart lived up to his billing as the tournament top-seed as he won three straight games to start his campaign. After being held to a draw by his closest pursuer, FM Mohamed Ibrahim Khouri of Abu Dhabi, in the fourth round, Ishaq quickly returned to his winning ways by closing out the round-robin event with another set of three consecutive victories.

“It has been a phenomenal year for Saeed Ishaq, who earlier won the national men’s and blitz titles. He has been a dominating force in the UAE chess circuit and his emphatic performance on the big stage will be a source of inspiration for many young chess players,” said (Ibrahim Al Bannia, Chairman of Dubai Chess Club). “Despite being away from top-flight competition for a good number of years to complete his studies in the US, Ishaq’s passion for chess has not waivered and we are grateful that he continues to showcase his talents and bring honour to the club and the UAE.”

Ishaq, who is on the comeback trail after a brief hiatus to complete his engineering studies in the USA, is also the reigning holder of the UAE National Men’s Chess Championship, which he won in September. In January, he also won the gold medal at the UAE Blitz Chess Championship, giving him the rare distinction of being the UAE’s best player in both standard and blitz time controls.

Ishaq credited the support of the His Highness Sheikh Hamdan Bin Mohammed Bin Rashid Al Maktoum, Crown Prince of Dubai and Chairman of the Dubai Sports Council, in helping him achieve his goal of winning the UAE’s most important chess titles this year. He also acknowledged the support of His Highness Sheikh Hamdan Bin Rashid Al Maktoum, Deputy Ruler of Dubai and UAE Minister of Finance, who has been the club’s main patron and has been a key factor in the continued rise of Dubai as a chess powerhouse in the UAE and across the Arab region.

He said the Dubai Chess Club Board of Directors has also provided the needed resources, coaches and environment to nurture players like him to achieve their goals. Ishaq was assisted by Grandmaster Elmar Magerramov in most of his campaign this year, including the President’s Cup.

However, Ishaq, who holds a Master’s Degree in Transportation from Massachusetts Institute of Technology(MIT) and is currently employed at the Roads and Transport Authority (RTA), admitted that working full time can be a serious handicap in his pursuit of more chess championships and the elusive grandmaster title, but he says he is grateful to the RTA for accommodating his schedule and supporting him as one of the UAE’s most promising chess players.

Given his day-time job as an engineer, he said the RTA’s support has been crucial in allowing him to participate and win three of the UAE’s major championships this year, as well as registering a solid finish at the Arab Elite Chess Championship – Kirsan Ilyumzhinov Cup hosted by Dubai in June and July, where he finished strongly at fifth behind some of the region’s finest grandmasters.

Taking the runner-up honours in the President’s Cup was Khouri with six points, while Ajman’s FM Marshool Hamdan was a distant third with four points. Ali Abdulkarim of Sharjah finished fourth with 3.5 points and FM Ahmed Abbas Khouri of Abu Dhabi was fifth with three points. Rounding out the standings were Dubai’s Abdulaziz Ali and Candidate Master (CM) Fareed Ahmed, who had 2.5 points apiece for joint sixth and seventh, and Sharjah’s Mosallam Mohammad, who finished eighth.

“Ishaq’s convincing win in the President’s Cup punctuated Dubai’s reputation as the most dominant force in UAE chess,” said (Najeeb Saleh, Head of Technical Committee). “We are only seeing the tip of the iceberg as we expect to generate more impressive results with the implementation of a comprehensive training programme that aims to develop more chess champions and grandmasters in the future.”

The President’s Cup was the latest in a string of individual and team championships won by Dubai Chess and Culture Club this year. Aside from Saleh, other champions produced by the club this year were FM Sultan Ibrahim, who won the gold medal in the Under-18 category of the Arab Age Group Championships, with Ahmed Fareed winning the bronze in the Under-16.