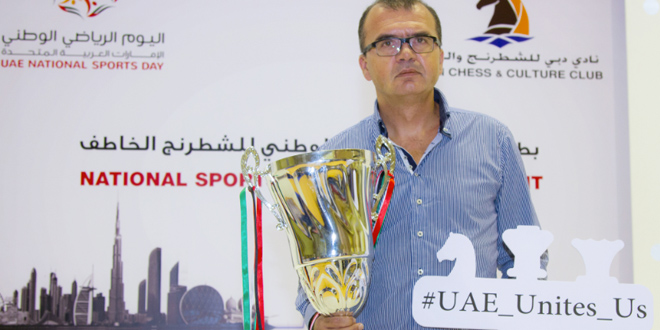 With the championship already in the bag, Sokolov settled for a draw with Filipino ninth-seed Marvin Marcos in the seventh round. Sokolov received the championship Cup and cash prize from Yahya Mohamed, Development and Planning Manager of the club.

Marcos, fresh from ruling the club’s October Blitz Tournament, received the runner-up prize with six points. Two other players also scored six points, but Francis Erwin Dimarucut and Marlon Mortel, both from the Philippines, settled for third and fourth due to lower tiebreak scores.

Up-and-coming Emirati junior player Faisal Al Abdouli was crowned best player in the Under-14 category with five points. Arencibia, who ruled the March edition of the club’s monthly blitz tournaments, was relegated to fifth with 5.5 points after managing only a draw in his final game against 13th-seed Manjunath J. of India. Jason Gonzales Orfano of the Philippines, Fasil M of India and Manjunath also had 5.5 points, but settled for sixth to eighth respectively based on their tiebreak scores.

The Fide-rated tournament was played under blitz chess rules and alloted three minutes plus a two-second increment per move for each player to complete a game.

Nearly 100 players from more than a dozen countries took part in the one-day event, which was part of the inaugural UAE National Sports Day celebration under the theme “UAE Unites Us”. The tournament was among hundreds of sporting activities organized all over the UAE to mark the occasion.