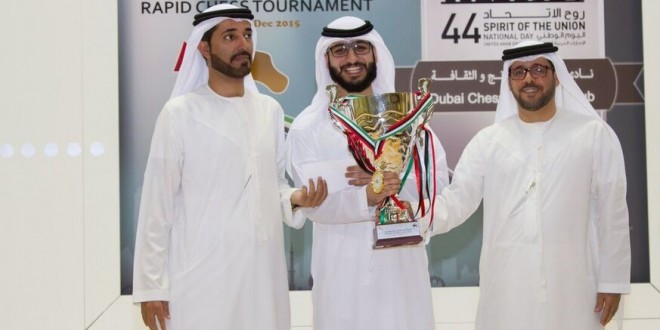 Dubai, UAE (December 3, 2015) – Emirati Grandmaster (GM) Salem Saleh gave local chess fans more reason to celebrate the special occasion as he clinched the 44th UAE National Day Rapid Chess Championship on Wednesday ahead of several top grandmasters in a field of more than 110 players from over 20 countries. With another solid performance on the final day of competitions fittingly held on UAE National Day at the Dubai Chess and Culture Club, the top-seeded Saleh hiked his tally to eight points on seven wins and two draws in the nine-round Swiss system tournament.

Saleh drew his matches with second-seed GM Ivan Sokolov of the Netherlands, who is his coach in the UAE national team, and third-seed GM Elmar Magerramov of Azerbaijan, the Dubai Chess and Culture Club head coach, in the seventh and eighth rounds before wrapping up the tournament with a resounding final-round win over India’s Manjunath J.

“This is a fantastic result for Grandmaster Salem Saleh and for UAE chess in general, and it was especially remarkable that he won it on UAE National Day. The turnout was equally impressive with over 100 players from more than 20 countries competing for the main prizes and various special category awards. Dubai Chess and Culture Club will continue to host international events that will showcase local talent and provide the growing chess community in the UAE an excellent avenue to test their capabilities against elite players from different countries,” said Ahmed Khalifa Al Thani.

International Master (IM) Ibrahim Sultan won the prize for best Emirati player, while Salim Ahmed Salim Al Kaabi was the top Dubai player. Aysha Jehad was best female UAE player and Bashaer Khalil was the top Dubai female player. Special awards were also handed out to Manjunath as the top scorer in the Under-2200 rating category and the Philippines’ Joseph Ignacio in the Under-1800 category.

The tournament is organised each year to commemorate the founding anniversary of the UAE. This year’s edition gave away AED 22,000 in total cash prizes with the champion receiving AED 5,000 along with the champion’s cup.  Time control was 15 minutes plus three seconds per move for each player. Emirati International Arbiters (IA) Mahdi Abdul Rahim and Saeed Yousef Shukri served as chief arbiter and deputy chief arbiter respectively, assisted by IAs Mohamed Abdulla and Jamal Qasim and Majid Ali Abdouly.