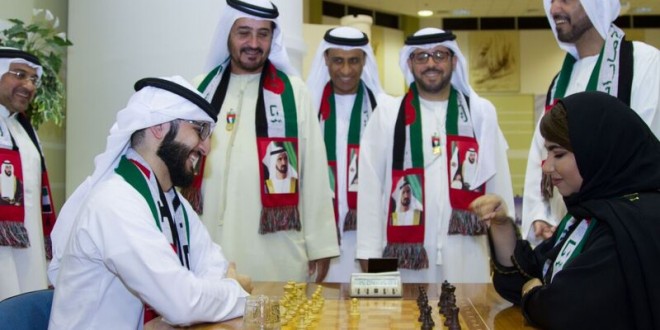 Dubai, UAE (November 30, 2015) – Complementing the colourful lights that adorned the club’s premises to mark the occasion, grandmasters set the board on fire in the first day of competition in the 44th UAE National Day Rapid Chess Championship at the Dubai Chess and Culture Club on Monday. Emirati top-seed Grandmaster (GM) Salem A.R. Saleh led the onslaught after sweeping all his assignments to maintain a perfect three-point slate entering the second day of competitions.

Ibrahim Al Bannai, Chairman of Dubai Chess and Culture Club, earlier signalled the opening of the tournament after making the ceremonial first move on the top-board match between Saleh and up-and-coming Emirati Aysha Jehad, which the grandmaster dutifully won for his first point. Al Bannai was joined by Ahmed Al-Thani, Secretary General of the Arab Chess Federation, Mohamed Al Husseini, the club’s manager, members of the club’s board of directors and representatives from different government entities in the short ceremony that officially announced the start of the tournament.

More than 110 players from over 20 countries are taking part in the nine-round Swiss system tournament organised each year to commemorate the founding anniversary of the UAE.

Saleh will take on Lazarev at the top board in the fourth round, as the tournament heats up with many of the seeded players paired against each other. Other interesting matches will pit second-seed Sokolov against seventh-seed International Master (IM) Sharif Mehrshad of France, third-seed Magerramov against eighth-seed IM Iva Videnova of Bulgaria, fourth-seed Arencibia against Sohib Okla of Syria, and 10th-seed Ishaq against fifth-seed Grivas.

The tournament offers AED 22,000 in total cash prize with the champion receiving AED 5,000 along with the champion’s cup.  There will also be awards for the best-performing UAE players as well as top Dubai players. Time control is 15 minutes plus three seconds per move for each player. Emirati International Arbiters (IA) Mahdi Abdul Rahim and Saeed Yousef Shukri serve as chief arbiter and deputy chief arbiter respectively, assisted by IAs Mohamed Abdulla and Jamal Qasim and Majid Ali Abdouly.