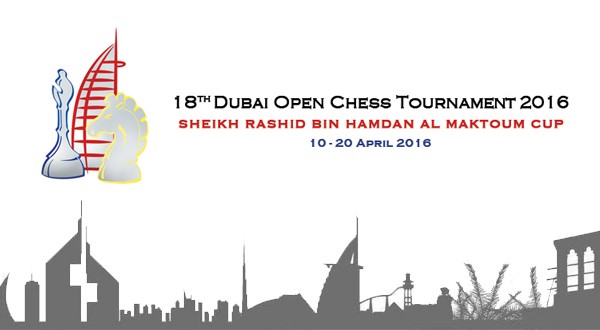 Dubai, UAE (January 13, 2016) – Dubai Chess and Culture Club has opened the registration for the 18th Dubai Open Chess Tournament – Sheikh Rashid Bin Hamdan Al Maktoum Cup, which will be held from April 10-20, 2016, at the club’s Sheikh Saeed Bin Hamdan Hall. According to Ibrahim Al Bannai, Chairman of Dubai Chess and Culture Club, many of the world’s leading chess grandmasters have already expressed their interest to compete in the Middle East’s longest-running elite chess tournament.

The event is on track to receive players from dozens of countries following the huge success of the 2015 edition, which registered more than 150 participants from over 40 countries, including first-time entries from Brazil and Jamaica.

“We have already received enquiries from grandmasters as far as Europe and Latin America long before we opened the tournament registration. This reaffirms the status of Dubai Open as one of the world’s most-awaited elite chess tournaments,” said Al Bannai. “The tournament will also feature a good mix of veteran grandmasters and up-and-coming junior players who are looking to prove their mettle against some of the best open players in the world. This is a great recipe for exciting, high-quality chess. The games will be broadcast live on the internet, so chess enthusiasts from around the world will be keenly following the progress of the tournament.”

Turkish Grandmaster (GM) Dragan Solak surprised the more fancied GMs to rule last year’s tournament. Members of the UAE national team will spearhead the local contingent, with reigning Asian Continental champion GM Salem Saleh among those expected to add lustre to the tournament. Reigning UAE champion and Dubai Chess Club ace, Fide Master (FM) Saeed Ishaq, who will ride on the crest of a wave following a string of championship wins in 2015, and Woman International Master (WIM) Amna Nouman, the UAE’s top lady player, are also expected to trade wits with the best players from around the world. Ishaq, who had an impressive showing last year beating two of the tournament’s top-rated grandmasters, is looking to earn a GM norm at the event in his quest to become the UAE’s next grandmaster.

The tournament will run for nine rounds under the Swiss system format, with each player allotted 90 minutes plus a 30-second increment per move to complete a game. Most of the foreign grandmasters are expected to arrive on April 10, while the opening ceremony and first-round skirmishes will be held on April 11 from 6:30 pm.

The succeeding rounds will be played every day from 5:30 pm, except on April 16 (Saturday), which have rounds five and six at 10 am and 6 pm respectively. April 15 (Friday) will be a rest day, during which the club will host the Dubai Open Blitz Cup at 4:30 pm. The final round will be on April 19, with the awarding ceremony to be held on the following day at 7 pm.

The tournament offers a total prize fund of USD50,000, with USD13,000 and custody of the Sheikh Rashid Bin Hamdan Al Maktoum Cup awarded to the champion. The rest of the top 15 players will receive cash prizes. There are also special prizes for the top two female players, top two UAE players, top two Dubai players, top Arab player, and the player with the best rating performance.

According to Al Bannai, the tournament is open only to players with a Fide rating of 1500 and above. The final day of registration is on March 10. The club will broadcast the matches live on the internet through its website www.dubaichess.ae and other popular internet chess sites.