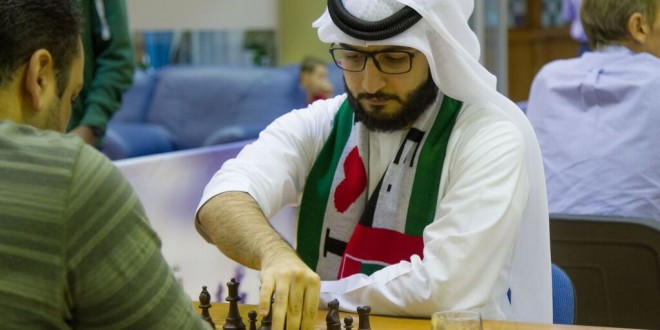 Dubai, UAE (April 1, 2016) – Dubai Chess and Culture Club has announced another powerful line-up of grandmasters that will compete at the 18th Dubai Open Chess Tournament 2016 – Sheikh Rashid Bin Hamdan Al Maktoum Cup, which will run from April 10-20 at the club’s Sheikh Rashid Bin Hamdan Hall. Ahmed Al Thani, Vice-President of Dubai Chess and Culture Club and Chairman of the Organising Committee, also revealed that the final phase of preparations has been completed, including the hotel accommodation of participants and a review of the tournament regulations.

Held under the patronage of His Highness Sheikh Hamdan Bin Rashid Al Maktoum, Deputy Ruler of Dubai and Minister of Finance and Industry of the UAE, the tournament will be a nine-round Swiss system event with a time control of 90 minutes plus a 10-second increment for each move. It has a total prize fund of US$50,000, with US$13,000 going to the champion and the rest of the top 15 players receiving cash prizes.

During a recent meeting with committee members Jamal Mohammad Abdouly and Abdul Karim Al Marzouqi and tournament coordinator Mohammad El Husseiny, Executive Director of the club, Al Thani said the committee appointed International Arbiter (IA) Mahdi Abdul Rahim as Tournament Director for the fourth year in a row. Abdul Rahim, who currently heads the UAE Arbiters’ Committee and serves as Chairman of the Arab Arbiters’ Commission, is one of the most experienced tournament arbiters and organisers in the region, having officiated in various world, regional and national championships.

According to Al Thani, Armenian Grandmaster (GM) Gabriel Sargissian (Fide rating: 2702) will lead another explosive field of competitors this year as the tournament top-seed. The cast of early favourites also includes 18 other elite grandmasters with a rating above 2600, including the UAE’s top player GM Salem AR Saleh (2615). Players from at least 32 countries have already registered for the tournament. Al Thani said registration of players from outside the UAE has already been closed, while UAE nationals and residents can still register until April 3.

The committee also approved new equipment to broadcast the games live on the club’s website and other popular chess sites. As one of the world’s strongest open tournaments, Dubai Open consistently attracts many of the best players in the Middle East and other countries around the world, including those in Europe, Asia, Africa and North and South America. This has also resulted in a huge number of fans closely following the live broadcast online.