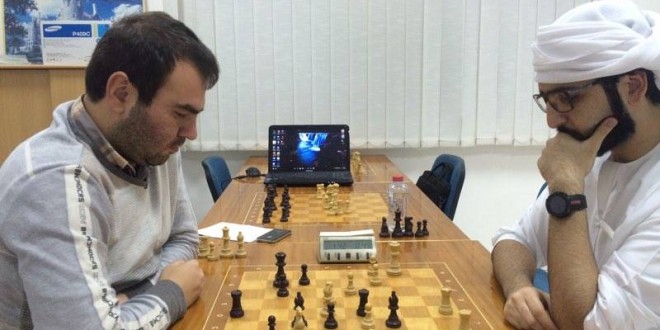 British Grandmaster (GM) Gawain Jones and Russia’s GM Boris Savchenko caught up with the leaders after grinding down their respective opponents in drawn-out endgames in the seventh round of the Dubai Open Chess Tournament – Sheikh Rashid Bin Hamdan Cup at the Dubai Chess and Culture Club. Sixth-round joint leaders GM Vladimir Akopian of Armenia and GM Ivan Sokolov of the Netherlands maintained their share of the lead after agreeing to an uneventful draw after 31 moves of play on the first board. The four players each have six points heading into the final two rounds of the nine-round Swiss system tournament, with Akopian taking on Jones at the top board and Sokolov, the UAE national coach, contesting Savchenko on second board in round eight. The leaders are trailed by eight players with 5.5 points each.

Playing against Indian International Master (IM) M. S. Thejkumar’s Caro-Kan Defence, Jones, who ruled the Dubai Open Blitz Cup last Friday, temporarily sacrificed a pawn and allowed an exchange of queens that doubled his f-pawns to create pressure on the seventh rank with his rooks dominating the b-file.

Unable to defend precisely, the Indian dropped a pawn on the 27th move, but Jones failed to address the weakness of his h4-pawn, which became a prime target and allowed black to maintain the balance despite the material disadvantage in a bishop-and-pawns ending.

Thejkumar eventually won the h4-pawn in exchange for one of his doubled f-pawns, creating his own passer on the h-file, but the game remained balanced with Jones maintaining his passed pawn on the c-file. The game took a huge turn for the worse for the Indian player when he mysteriously allowed his king to wander too far away in the queenside, giving Jones’ king a free reign against black’s unprotected h- and f-pawns. Thejkumar resigned on the 82nd move as Jones slowly marched each of his doubled pawns on the f-file to the finish line.

Savchenko, playing black, outplayed India’s GM B. Adhiban in a Queen’s Gambit opening that stretched to 92 moves. The Indian opened the e-file for his rook with a pawn push to e4 on move 18, trying to create play against the awkward placement of black’s e6-bishop and queen on e7. Adhiban, however, could not find the correct plan as Savchenko wriggled out of trouble and went on to zero on white’s isolated d-pawn.

The Indian managed to push the d-pawn two squares further into black’s territory, but as it was nonetheless doomed to fall, Adhiban decided to sacrifice the exchange to preserve pawn on d6. Savchenko returned the exchange on move 47 to transpose into a rook endgame a pawn up. The Indian defended vigorously, but the Russian had everything under control to wrap up the point on move 92.

Fide Master (FM) Saeed Ishaq continues to be the top pointer among the UAE players after settling for a draw with IM Mohammad Minhaz Uddin of Bangladesh. Ishaq has 3.5 points, half a point ahead of FM Hamdan Marshool, FM Ahmed Fareed, Mohamed Marshool, Ali Abdulaziz and FM Mayed Alrashedi. The seventh round also saw the longest game in the tournament so far, as Kazakhstan’s GM Petr Kostenko and India’s GM Sandipan Chanda battled for five hours and 142 moves. The game ended in a draw.

World number 18 GM Shakhriyar Mamedyarov of Azerbaijan was a guest during Sunday’s round seven matches. Mamedyarov won the Dubai Open in 2004. He was accompanied by the UAE’s GM Salem A.R. Saleh, who unfortunately had to withdraw from the tournament for health reasons.