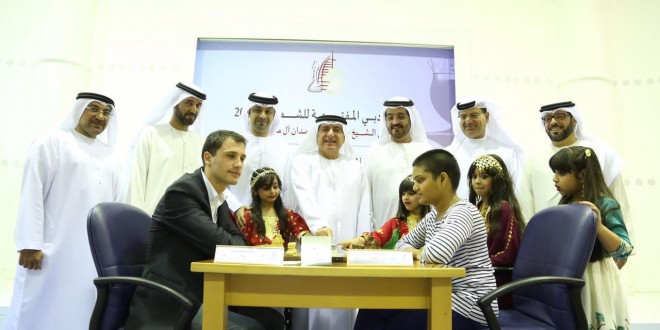 Grandmasters prevail in opening round of Dubai Chess Open Championship

The Dubai Chess Open 2016 – Rashid Bin Hamdan Al Maktoum Cup opened Monday night at the Dubai Chess and Culture Club with most of the favourites easily hurdling their round-one assignments, but a handful could only split the point against their overmatched opponents – and some even had to work hard to save the draw.

Organised under the patronage of His Highness Sheikh Hamdan Bin Rashid Al Maktoum, Deputy Ruler of Dubai and Minister of Finance and Industry of the UAE, the 18th edition of one of the world’s strongest open tournaments was officially opened by His Excellency Ibrahim Abdul Malik, Secretary-General of the Public Authority for Youth and Sports Welfare, who executed the ceremonial first move on the first-board match between tournament top-seed Grandmaster (GM) Ivan Cheparinov of Bulgaria and Indian Woman International Master (WIM) Pratyusha Bodda. He was joined by Khalid Al-Midfaa, Assistant Secretary-General of the Commission, along with Ibrahim Al Bannai, President of the Arab Chess Federation and Chairman of Dubai Chess and Culture Club, and Hussein Abdullah Khoury, Chairman of Abu Dhabi Chess Club.

The tournament has established a new record in participation with more than 200 players from 41 countries, including 46 Grandmasters, of which 25 are rated above 2600. There are also eight Woman Grandmasters (WGM) among the 130 titled players vying for the championship. The tournament offers a total cash purse of US$50,000, with US$13,000 and the Rashid Bin Hamdan Cup going to the champion. The rest of the top 15 players will also receive cash prizes. There are also special awards for the top Arab and UAE players and to women players. A blitz tournament will be held on the rest day on Friday (April 15) with a total prize fund of US$4,000.
While Chaparinov had no problems in dispatching of Pratyusha in 48 moves of a Semi-Slav opening, joint top-seed Anton Korobov of Ukraine had to extricate himself from a difficult position before settling for a draw with IM Lilit Galojan, who plays for the Armenian national women’s team. Korobov’s handling of the King’s Indian Defence was too tame as Galojan dictated the tempo from the outset – and even missed an opportunity to win material on move 16. The game ended in a draw on move 41. Cuban GM Lazaro Batista Bruzon, the fourth highest-rated player in the tournament, was also lucky to escape with a draw against 16-year-old Indian talent Aradhya Garg. Bruzon, who likewise employed the King’s Indian Defence encounter, won a pawn on the 33rd move, but his untitled opponent had a firm grip of the dark squares around Bruzon’s king as compensation. On move 36, Garg missed an opportunity to intensify his attack and the game ended abruptly five moves later by perpetual check. Eighth-seed GM Igor Kovalenko failed to convert his chances in the middle game as he was likewise held to a draw by India’s Al Muthaiah.
Spain’s GM Angel Lopez Arribas also had to defend a difficult endgame against 12-yeard-old Turkish talent Kaan Kucuksari in their game that ended in a draw in 60 moves. Other untitled players who scored upset draws against titled players were Iran’s Kasra Godarz against Armenia’s GM Zaven Andriasian, the Philippines’ Marvin Marcos against IM Rafael Diego Di Berardino and India’s Anant Prabhudesai against compatriot IM Padmini Rout.

The rest of the top-seeded players, meanwhile, cruised to victories, including the UAE’s GM Salem Saleh, who defeated India’s Srinath Rao, sixth-seed Baadur Jobava of Georgia, who outplayed Indian WGM Bhakti Kulkarni and Indian seventh-seed B Adhibhan, who won over compatriot Prince Bajaj.

British fifth-seed David Howell, meanwhile, had a tough customer in the UAE’s FM Saeed Ishaq. Howell sacrificed his queen on move 47 and banked on his active rooks and Ishaq’s weak king to maintain the initiative. The Emirati countered with threats against white’s king with his queen and knight, although Howell’s bishop proved more than adequate in securing the kingside fortress. There were a couple of chances to force a draw with a knight sacrifice, but with Ishaq playing on increments, the tactics were not so obvious over the board. Howell eventually prevailed after 73 moves.

Abdulmalik said the tournament’s success in the past 18 years is a strong testament to the strong efforts of the club in promoting chess in the region. He congratulated the club for making the tournament one of the landmark chess events in the world. He thanked His Highness Sheikh Hamdan bin Mohammed bin Rashid Al Maktoum, Crown Prince of Dubai and Chairman of the Dubai Sports Council, for his support, and His Highness Sheikh Hamdan Bin Rashid Al Maktoum Deputy Ruler of Dubai and UAE Minister of Finance, for being the main patron of the sport.