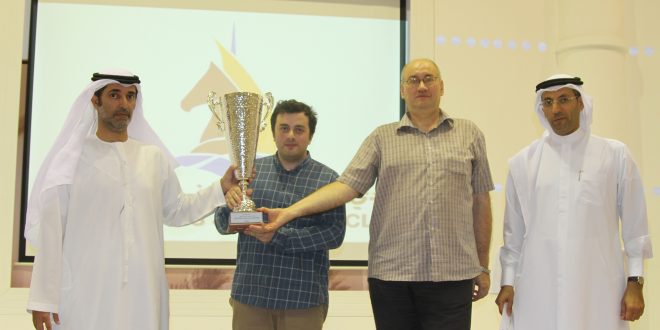 United and Pharaohs, manned by Egypt’s GM Ahmed Adly and GM Bassem Amin, were actually tied in the final standings with 16 points each, but the Egyptians yielded to the superior tiebreak score of the champions. Adly and Amin zoomed to the lead after the first five rounds Sunday night, but were derailed by a draw with Universal Players’ GM Walter Arencibia of Cuba and International Master (IM) Sebbar Ali of Morocco in the sixth round Monday night, which ultimately allowed United to catch up despite the Egyptians closing out with shutout wins in their final three matches.

Arencibia and Ali secured a spot at the podium with 13 points despite a 0-2 defeat at the hands of Arab Unity’s IM Basheer Al Qudaimi and Talal Hilwani in the final round.

Guseinov and Barsov received the Dubai Cup and Dh4,500 from Jamal Al Abdouli, Secretary-General of Dubai Chess and Culture Club, and Najib Saleh, the club’s Technical Director. Adly and Amin received Dh3,000, while Arencibia and Ali were awarded Dh1,500.

The tournament was supervised by Emirati International Arbiter (IA) Mahdi Abdul Rahim, the chief arbiter, along with Mohammed Al-Husseini of Egypt and Jamal Kassim of Yemen. Saeed Yousuf was the tournament director.

A total of 38 teams comprising 99 players from 18 countries took part in the nine-round Swiss system tournament, which was one of the events organised by the club during the holy month of Ramadan.