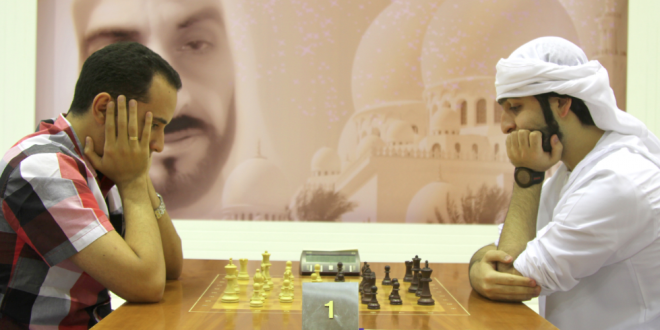 Azeri and Cuban grandmasters give chase half a point a drift

Dubai, UAE (June 11, 2016) – Grandmaster (GM) Bassem Amin of Egypt maintained his hold of the pole position with a round to go after another solid performance in Friday night’s seventh and eighth-round matches in the Allegiance to Sheikh Zayed Chess Tournament at the Dubai Chess and Culture Club.

Amin strengthened his quest for the championship with a win over top-seed GM Salem A.R. Saleh of the UAE for his seventh straight point, before agreeing to a draw with countryman GM Ahmed Adly in round eight. The second-seeded Amin hiked his total to 7.5 points, half a point ahead of GM Elmar Magerramov of Azerbaijan and GM Walter Arencibia of Cuba.

Salem, who rebounded from his seventh-round setback with a win over Greece’s GM Efstratios Grivas in round eight, has 6.5 points to share joint third place with Adly and the Philippines’ Ernesto Yap, who scored an upset win over the UAE’s International Master (IM) Ibrahim Sultan in round eight.

Grivas leads 11 others at joint fourth place with six points each, including Ishaq, Abo and Zemtsov, while Sultan and Nagueb Saleh dropped to joint fifth with several others each with 5.5 points.

Amin will try to protect his lead when he faces Magerramov at the top board in the final round of the nine-round Swiss system tournament. Arencibia will play Adly on second board, while the underdog Yap will have an uphill battle against the Asian champion Saleh on third board. Grivas will battle the Philippines’ Marlon Mortel on fourth board.

The organising committee announced that the top 10 players will receive cash prizes during the awarding ceremony right after the ninth-round games. Special awards will also be given to top finishers among UAE players. The tournament is being officiated by Emirati International Arbiters (IA) Saeed Yousuf, the tournament director, and Mahdi Abdul Rahim, the chief arbiter. IA Jamal Qasim of Yemen, IA Walid Abu Obeid of Jordan, IA Marcial Augusto of the Philippines and Majed Ali Abdouli of the UAE are the arbiters.

The club is also organising other competitions such as a team blitz chess tournament on June 19 and 20 that is open to all clubs, schools and companies.