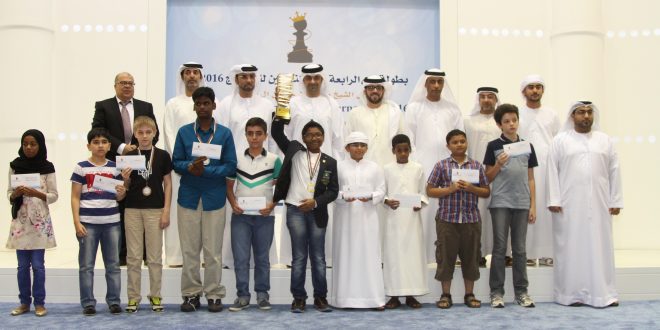 Rahman’s English Opening did not yield any significant advantage against Al Hosani, who was able to seize the initiative in the endgame with his rook, bishop and centralised king pressing against Rahman’s weak e-pawn. The Emirati, however, committed a strategic error on the 32nd move with a pawn push that seriously weakened his kingside pawn chain, while allowing Rahman to activate his rook and knight.

Although Al Hosani managed to cover his weaknesses, his missed an actively counter play that would have allowed his rook to penetrate the white fortress via the f-file, keeping the game unbalanced. Instead, the Emirati chose to passively defend his kingside pawns, which ultimately proved ineffective as Rahman gradually consolidated his position and eventually won more material en route to a 46-move victory. CM Sultan Al-Zaabi emerged the top scorer among UAE players with seven points after winning over compatriot Amer Sultan in the final round. Fourth-seeded Ahmad Ahmadzada of Azerbaijan, who also had seven points following a victory over the UAE’s Sultan Al Darmaky, secured fourth place with a higher tiebreak score, with Al-Zaabi securing the fifth spot.

Others with 6.5 points in order or ranking were Umbetov, Korcharyan, Armenia’s Eduard Hakobyan and India’s Ranjan Aryan, Gurmeher Singh, Kush Devnani and Pranav. The nine-round Swiss system tournament offered a total prize fund of US$10,000. Games were also transmitted live at the club’s website and major international chess sites.