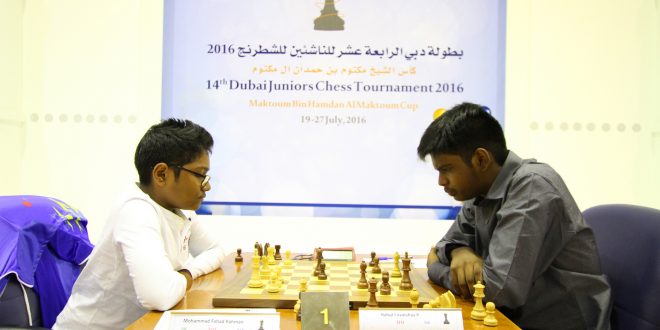 Top 15 standings after round 7

Rahman leads the tournament with 6.5 points, half a point ahead of the second-seeded Srivatshav and Ukrainian top-seed FM Viktor Matviishen, who prevailed over the UAE’s Candidate Master (CM) Sultan Al-Zaabi.

Eight players are bunched at joint third with 5.5 points each, including CM Omran Al Hosani and Saeed Al Hosani, who currently set the pace among Emirati players.

After exchanging most of the minor pieces, Rahman and Srivatshav were each left with a pair of rooks, queen and opposite-coloured bishops in a roughly equal endgame wherein the Indian’s more active major pieces compensated for his weakened queenside pawn structure.

Srivatshav decided to enter a forced line with 25…Rxd4 that would win Rahman’s queen for two rooks, but the Bangladeshi’s more active pieces and secure king proved decisive. Rahman’s two rooks eventually invaded the Indian’s weakened back rank and threatened to win more material, forcing Srivatshav to resign on the 42nd move.

Al-Zaabi and Matviishen contested a Queen’s Gambit Declined wherein the Emirati maintained parity with the black pieces until a tactical oversight on the 24th move allowed the Ukrainian to dominate the queenside with his two rooks and create a powerful passed pawn in the a-file. The loss dropped Al-Zaabi to a share of fourth place with five points.

The penultimate eighth round will be played Monday at 5:30pm, while the final round will be on Tuesday at 10am. Rahman will protect his lead against Matviishen in the eighth-round top-board match-up, while Srivatshav will go up against Ahmadzada on second board. Saeed Al Hosani will be up against Umbetov, while Al Hosani Omran will face Hakobyan.