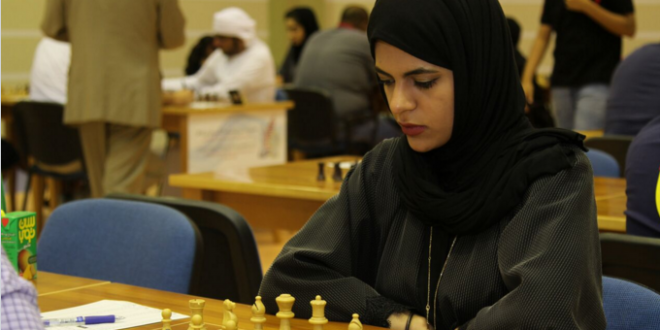 Dubai, UAE (August 21) – Woman International Master (WIM) Amna Nouman ruled the UAE President’s Cup women’s chess championship, which was recently held in Al Ain from August 11-18, to reaffirm her status as one of the country’s elite chess players. Nouman completed a masterful performance by finishing with eight points and a 1.5-point winning margin over a field that featured the UAE’s cream of the crop, including her teammates in the UAE national team.

Nouman’s championship finish is also the first by a player from Dubai Chess and Culture Club since the women’s division was introduced in the President’s Cup in 2013. The win also cemented her reign at the top of the UAE women’s ranking and gave Nouman a rare sweep of all major titles in the UAE, including championships in all age categories as well as the UAE Under-20 title, which she won a few days earlier. Nouman has also consistently won various Arab age-group championships.

Ibrahim Al Bannai, chairman of Dubai Chess and Culture Club, credited the achievements of the club’s young players to the strong support of Sheikh Hamdan Bin Rashid Al Maktoum, the honorary president of the club and the biggest benefactor of the chess movement in Dubai. Al Bannai also applauded the Dubai Sports Council for supporting the club’s various events, which helped provide vital tournament exposure to the club’s top prospects.

The coaching staff, headed by Technical Director Najib Mohammed Saleh, also played a key role in preparing the players for the event. Saleh thanked the club’s Board of Directors for sparing no effort in ensuring the best training and preparations of the club’s representatives to the UAE’s premier chess championship. Saleh said the club will continue with the extensive training and preparations as Ishaq and Nouman, along with fellow Dubai talent WCM Bashaer Khalil, will don the UAE national colors for the World Chess Olympiad next month in Baku, Azerbaijan.