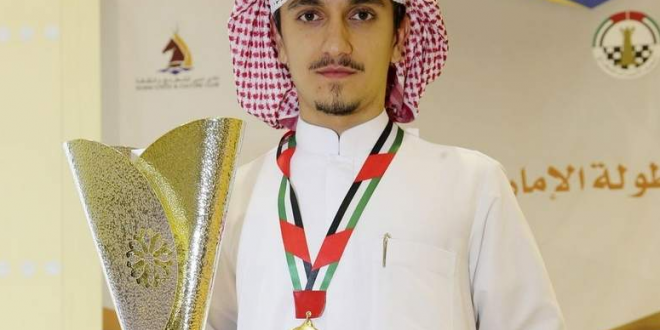 The defending champion won all seven matches to firmly retain the title in the hands of this year’s hosts, Dubai Chess Club, and sustain a solid comeback since finishing his postgraduate studies in the US. Ishaq actually already secured the championship as early as the sixth round as he built an insurmountable 1.5-point lead over his nearest pursuers. With his final-round win over Khaled Ahmed, Ishaq further extended his lead to two points in the final tally.

Ibrahim Al Bannai, Chairman of Dubai Chess and Culture Club, said Ishaq’s string of national titles has inspired many players, especially in light of his spirited comeback to the national team after a brief hiatus to pursue his studies. He said the club would support Ishaq to become the UAE’s third international grandmaster. Al Bannai also credited the strong performance of the club’s players to the support of His Highness Sheikh Hamdan Bin Rashid Al Maktoum, Deputy Ruler of Dubai and the patron of chess in Dubai, and His Highness Sheikh Hamdan Bin Mohammed Bin Rashid Al Maktoum, Crown Prince of Dubai and Chairman of the Dubai Sports Council.

Ishaq, who has won multiple championships in various age-group competitions before stamping his class on the men’s championship, said he was overjoyed to win his second straight national title. He also thanked Sheikh Hamdan Bin Rashid Al Maktoum and Sheikh Hamdan Bin Mohammed Bin Rashid Al Maktoum, as well as the club’s board of directors, for supporting his campaign in local and international competitions. He also recognized the important contributions of his coach, Grandmaster Elmar Magerramov, in helping with his tournament preparations and fine-tuning different aspects of his play. Apart from winning the UAE Men’s titles back-to-back, Ishaq is also the defending champion in the prestigious UAE President’s Cup.

Ishaq admitted the road to becoming a national champion was never easy, as he had to divide his time between chess training and his work as an engineer at the Roads and Transport Authority. However, he said the RTA has been supportive of his campaign, including his recent trip to Azerbaijan to represent the UAE in the World Chess Olympiad.

To sustain the momentum generated by the impressive performance of the club’s key players, Al Bannai has announced various tournaments for the rest of the year. The club also announced the dates of the Dubai Open Chess Tournament 2017, one of the world’s strongest open tournaments, which will be held from April 3-12, 2017.