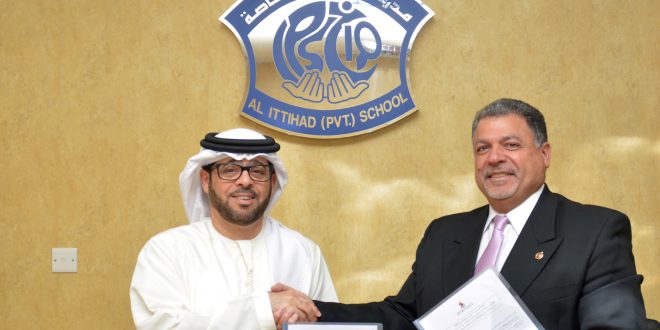 Dubai, UAE (November 2, 2016) – The search for the UAE’s new chess grandmaster continues to gain momentum as the Dubai Chess and Culture Club has expanded its school-based training programme to include new schools in Dubai. Ahmed Al Thani, Vice-President of the club, said the newly launched chess in schools program has already helped discover a number of raw talents who are now being provided advanced training by the club’s instructors.

The club has signed agreements with the Al Ittihad Private School Chess Academy and Al Jahedh primary School for Boys to establish chess academies and offer structured chess lessons to students from first to third grade. Al Thani, who signed the agreement with Dr. Adel Mahmoud, Deputy Director of Al Ittihad Private School, and Ms. Maliha Hashim, Principal of Al Jahedh primary School for Boys, said the club is eyeing more schools to be part of its scholastics program.

“The schools represent a fertile ground in our efforts to establish a much broader pool of talents who can be trained to become the UAE’s future chess grandmasters,” said Al Thani. “We have already identified several youth players who have strong potential through our partnerships with various schools. Establishing chess academies within these schools will further bolster our efforts to encourage and train more students to excel in chess. Al Ittihad Private School and Al Jahedh primary School for Boys have been among our strong supporters from the scholastics community. We are eager to take this partnership further with the opening of the chess academies.”

Mahmoud said the school appreciates the benefits of chess in the intellectual development of students. He also underlined the impact of chess on the academic performance of students, particularly in subjects such as science and mathematics. Mahmoud said the school’s involvement in chess dates back to the 1985 World Chess Olympiad in Dubai, wherein the school supported the preparations for the global event and sent its students to perform during the opening ceremony.

“Schools should actively look for ways to motivate students to participate in scholastic activities and excel in their studies,” said Mahmoud. “We therefore look forward to taking advantage of the expertise of Dubai Chess Club to provide a new platform for the students to develop their special abilities and become more actively involved in school activities.”

Hashim said chess complements the school’s focus on helping students improve their critical thinking abilities. “Chess helps develop intelligence and trains students become better at planning and research. Moreover, the chess academy is a big step towards discovering new talents who can become the new sports heroes of the UAE.”