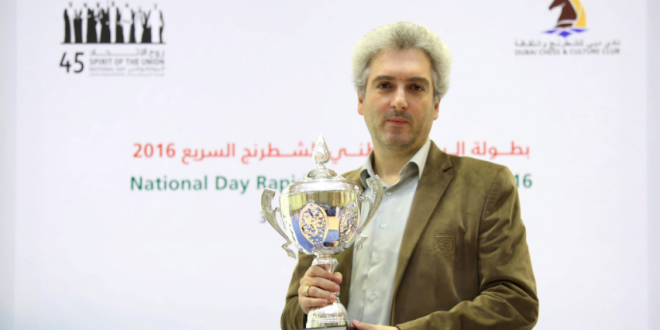 GM Viktor Moskalenko of Spain also scored eight points but dropped to second place after the tiebreak was applied. Moskalenko lost to Akopian in the seventh round but bounced back with wins over International Master (IM) Iva Videnova of Bulgaria and the Philippines Dennis San Juan in the eighth and ninth round respectively.

Rausis and Magerramov, who defeated IM Njili of Tunisia in the final round, shared the third and fourth spots with 7.5 points apiece. GM Walter Arencibia of Cuba occupied fifth place as he led a big group of players with five points each, which included, in order of ranking, Woman Grandmaster (WGM) Andjelija Stojanovic of Serbia, Fide Master (FM) Saeed Ishaq of the UAE, Romany Salah of Egypt, Anusweud Sasikumar of India, and the Philippines’ FM Antonio Molina and Mark Matutina, and Ali Rashid Ghanem of the UAE.

Ali Rashid Ghanem and Bashaier Khalil received the special awards as the best male and female UAE players. IM Sultan Ibrahim and Aisha Jihad took the awards as the best Dubai players. Anusweud Sasikumar was the top player in the under-2200 rating category, while Iran’s Nader Nowroozian picked up the prize in the under-1800 rating category. A total of Dh22,000 in cash prizes were awarded to the top eight players and special awardees.
The tournament, Dubai’s centerpiece chess event commemorating the 45th founding year of the UAE,  attracted a multinational field of more than 180 players from 24 countries, including five other grandmasters and 18 titled players.
The nine-round Swiss system event allotted a thinking time of 15 minutes plus five seconds per move. Officiating the tournament were IA Jamal Qasim of Yemen, IA Walid Abu Obaid of Jordan, IA Augusto Marcel of the Philippines and the UAE’s Isa Marzouki and Majid Ali Abdouly.