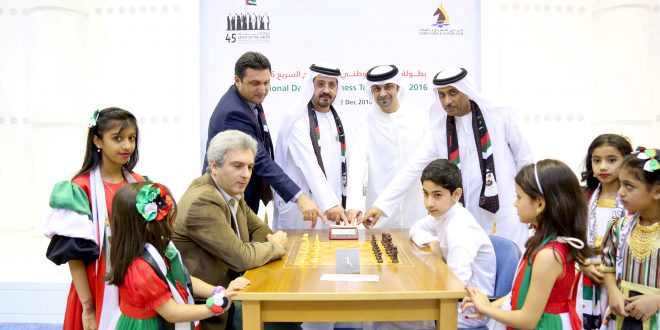 The event, which serves as the centerpiece attraction of the club’s activities commemorating  the 45th founding year of the UAE, was opened by His Excellency Khalid Al Midfa, Assistant Secretary-General of the Public Authority of Youth and Sports Welfare, His Excellency Ibrahim Al Bannai, Chairman of the Dubai Chess and Culture Club, and Adnan Layouni, representative of the Dubai Sports Council.

Against a backdrop of colourful lights and decorations inspired by the UAE flag, Akopian, the first-ever champion of Dubai’s premier chess event, the Dubai Open Chess Tournament, and a finalist in the 1999 Fide World Chess Championship, showcased his mastery of the 64-square battleground after stringing together six straight wins, including a victory over fellow grandmaster Walter Arencibia of Cuba in the sixth round, to remain unscathed heading into the final three rounds of the nine-round Swiss system tournament.

Moskalenko likewise has six points after defeating Woman Grandmaster (WGM) Andjelija Stojanovic of Serbia in the sixth round. With their wins, Akopian and Moskalenko set-up an exciting showdown on Friday, the UAE national day, to dispute the tournament leadership.

Al Bannai said the annual tournament pays tribute to the leadership of the UAE and their vision for the country. He said the different nationalities taking part in the event reflects the UAE’s success in creating a progressive society that embraces different cultures and ethnicities, built on the solid foundation laid by the late former UAE President His Highness Sheikh Zayed Bin Sultan Al Nahyan.

Arencibia and Stojanovic lead a big group of players with five points apiece, including Fide Masters (FM) Saeed Ishaq and Marshool Hamdan of the UAE, International Master (IM) Iva Videnova of Bulgaria and IM Kamel Njili of Tunisia among others.

Held as part of the club’s activities to mark the UAE’s 45th National Day, the tournament offers a total of Dh22,000 in cash prizes, with the winner taking home Dh5,000 and the championship trophy. The rest of the top eight players will receive cash prizes, as well as the top UAE players (male and female), top Dubai players (male and female) prizes and top scorers in the under 1800 and under 2000 rating categories.

The nine-round Swiss system event allots a thinking time of 15 minutes plus five seconds per move. The club has also appointed IA Jamal Qasim of Yemen, IA Walid Abu Obaid of Jordan, IA Augusto Marcel of the Philippines and the UAE’s Isa Marzouki and Majid Ali Abdouly as arbiters.