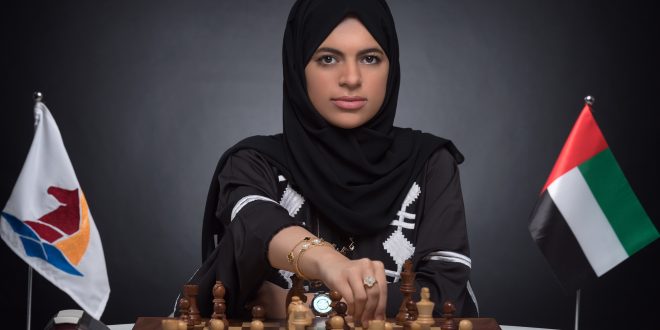 Shortly after signing a contract to play under the Dubai Chess and Culture Club, Woman International Master (WIM) Amna Noaman showed why she’s the most sought-after player in the UAE women’s chess circuit by winning the UAE National Ladies Rapid Chess Championship 2017, which recently concluded in Ras Al Khaimah.

Starting the tournament as the second-highest ranked player, Noaman was limited to just 1.5 points in the first three rounds, but Dubai’s top lady talent propelled herself to the championship with a powerful six-game win streak, capped by a final-round victory over erstwhile solo-leader Woman Fide Master (WFM) Wadima Humaid Alkalbani.

Noaman scored 7.5 points from nine rounds, edging out Alkalbani and three others who had seven points apiece for the title.

“This is a terrific performance by Amna and a great start for the 2017 season. She was in a difficult position early in the tournament, but she crawled her way back into the thick of things, which is really what makes her a very strong contender in such events,” said Yahya Mohamed, Planning & Development Manager. “We have big plans for her career and this win will definitely boost her confidence as she continues her pursuit to earn the grandmaster title.”

Nearly 50 of the UAE’s top women players competed in the nine-round Swiss system tournament, which allotted 15 minutes plus a 10-second increment per move to complete a game.