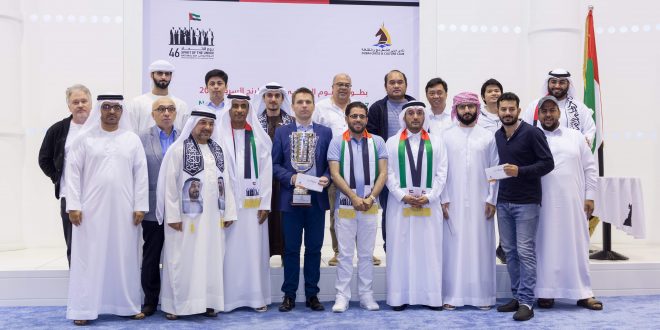 Top-seed Grandmaster (GM) Salem Saleh of the UAE disposed of Spain’s GM Viktor Moskalenko in the final round’s marquee top-board match-up to hike his output to eight points from nine rounds, matching the score of second-seed GM Bartosz Socko of Poland and third-seed GM Ahmed Adly of Egypt. However, it was Socko, who defeated the UAE’s FM Saeed Ishaq in the final round, who took the champion’s trophy with the highest tiebreak score, with Adly, who won over Serbia’s Woman International Master (WIM) Ljilja Drljevic, and Saleh taking the next two places. The UAE’s International Master (IM) Omar Noaman pulled a big upset over GM Walter Arencibia of Cuba to move to solo fourth place with 7.5 points. A group of eight players shared the fifth to 12th spots with seven points apiece, led by GM Elmar Magerramov of Azerbaijan, who defeated the Philippines’ Rocky Pabalan in the final round.

Ibrahim and Jehad Aysha were awarded the prizes for the best results among UAE players for male and female respectively, while Ishaq and Woman Candidate Master (WCM) Bashaer Khalil were the top finishers from the Dubai Chess and Culture Club.

Uzbekistan’s Djakhongir Kurbanov received the prize for the top scorer in the 2200-below rating category, while Hermie Cagatin of the Philippines received the top prize in the 1800-below category. A total of 180 players from 26 countries, including six grandmasters and several other titled players, took part in this year’s edition of the annual tournament that celebrates the UAE’s founding day. Each player was allotted 15 minutes plus a five-second increment per move to complete a game.

“The UAE National Day Chess Tournament in Dubai is the most awaited competition this time of the year as can be seen by the huge number of participants from nearly 30 countries,” said Ahmed Khalifa Al Thani, vice-chairman of the Dubai Chess and Culture Club. “The tournament has been a fitting finale to what has been another productive year for chess in the UAE, as we now set our sights to new and bigger goals in the coming year.”