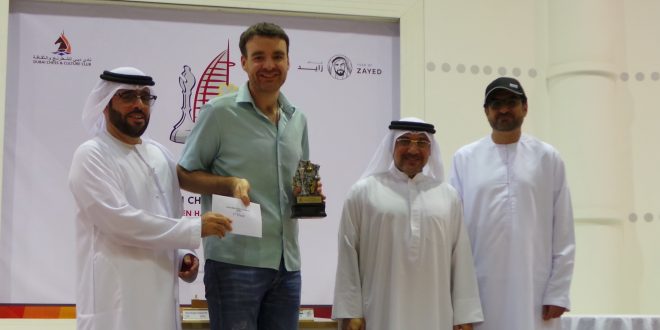 GM Gawain Jones of England won theChampionship finishing alone with 7 points out of 9 rounds yesterday at the Dubai Chess Club in Dubai, UAE.

A total of 72 players competed in the half-day tournament including 19 Grandmasters, 5 International Masters and 6 FIDE Masters. Each player has some 5 minutes for the whole game. At stake was a total of $4,000 in cash prizes. Jones won the top prize of $1,000.

Jones, 31, former British champion in 2012, got off to a winning streak in the first four rounds as he beat Nagueb Saleh of the UAE, IM Arash Tahbaz of Iran, GM Shardul Gagare of India and GM Poria Darini of Iran. Halfway in the Swiss system tournament he drew with GM Levan Pantsulaia of Georgia in the fifth round then stumbled with a loss against GM Vladislav Kovalev in the 6th round. But a winning surge in the last three rounds catapulted him to victory as he beat GM R. Laxman of India, GM Eltaj Safarli of Azerbaijan and IM Amin Tabatabaei of Iran in the final round.

Local hero GM Salem A.R. Saleh of the UAE finished in second place after tie break with four other players. Tied with Saleh at 7 points each were IM Amin Tabatabaei of Iran, GM Vladislav Kovalev of Belarus and GM Iturrizaga Bonelli Eduardo of Venezuela.

Following with 6.5 points each are GM Parham Maghsoodloo of Iran and GM Mykhaylo Oleksiyenko of Ukraine.

Under the Patronage of Sheikh Rashid Bin Hamdan Bin Rashid Al Maktoum, the standard time control tournament resumes 5:30 pm daily after two rounds Saturday. At stake is a total of $50,000 in cash prizes with a top prize of $13,000 for the champion. Top games are broadcast live on the internet. Visit official site www.dubaichess.ae or find full results and standings in chess-results.com.