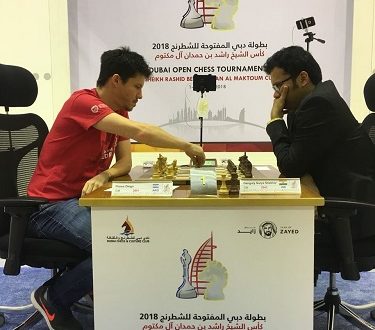 Flores, 36, 4-time Argentine champion and 2012 American Continental co-champion, used the English opening and gave the exchange sacrifice early on the 14th move. He parried Black’s kingside attack and gained three pawns in compensation which he deftly escorted to the 7th rank. Unable to prevent promotion, Ganguly resigned on the 58th move.

It was a heartbreaking loss for the Indian GM who had led throughout the tournament but lost in the last two rounds. Flores, seeded 21st with a rating of 2601, was unbeaten in the 9 round tournament and had won against GMs Mustafa Yilmaz of Turkey and Parham Maghsoodloo of Iran. He drew with GMs Iturrizaga and Laxman of India.

Three players finished with 7 points each to tie for 2nd to 4th, namely GM Eduardo Iturrizaga Bonelli of Venezuela, S.P. Sethuraman of India and Ahmed Adly of Egypt. Iturrizaga drew with Adly in 34 moves of an Open Catalan. Sethuraman drew with GM Gawain Jones of England in a marathon 89 moves of the British player’s King’s Indian Defense. Ganguly finished with 6.5 points in a tie for 5th-11th places for a share of the $50,000 prize fund together with Jones, top seed Yuriy Kryvoruchko of Ukraine, Vladislav Kovalev of Belarus, Eltaj Safarli of Azerbaijan and Emre Can of Turkey.