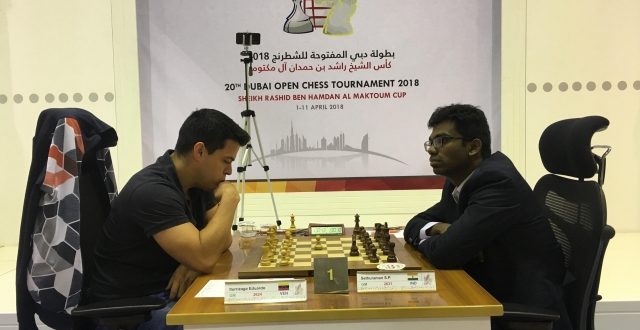 In the battle of Indian leaders, Grandmaster Surya Shekhar Ganguly of India beat Abhijeet Gupta and S.P. Sethuraman in back to back rounds Saturday to grab solo lead with 5.5 points out of 6 rounds of the Dubai Open Chess Championship at the Dubai Chess Club in Dubai, UAE.

In the morning round 5, Ganguly used the English opening to beat Gupta in a Bishop endgame. He was about to promote a pawn when Gupta resigned on the 48th move.

In the afternoon round 6, Ganguly turned back the Catalan Opening of Sethuraman and in a Queen and pawn endgame escorted his pawn to the second rank forcing Sethuraman to resign on the 50th move.

Ganguly, 35, former Asian Continental champion in 2009, hails from Kolkata. He was gold medalist in the 2007 Asian Indoor Games and gold medalist at the 2010 World Chess Team Championship.

Sethuraman and Gupta follow with 4.5 points each together with six others, namely GM Prasanna Vishnu and IM Bharathakoti Harsha of India, GMs Gawain Jones of England, David Anton Guijarro of Spain, Adly Ahmed of Egypt and Emre Can of Turkey. Under the Patronage of Sheikh Rashid Bin Hamdan Bin Rashid Al Maktoum, the tournament is a 9-round Swiss system with games scheduled 5:30 pm daily. Top games are broadcast live on the internet. Visit official site www.dubaichess.ae or find full results and standings in chess-results.com.