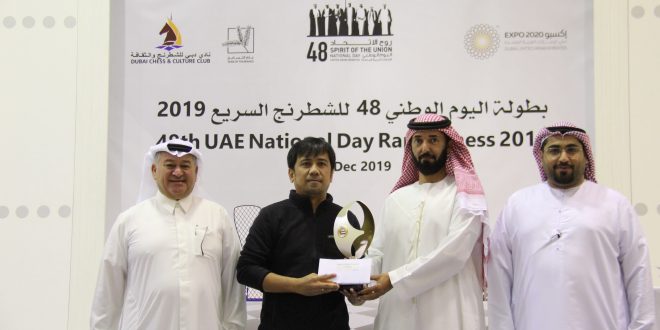 Jamal Al Abdooli, general secretary of the club, Essa Lutfi, the club’s CFO, and International Arbiter (IA) Saeed Yousuf Shakari, vice-chair of the club’s technical staff, handed out the championship cup to Dimakiling and other prizes to the rest of the winners during the awarding ceremony. In his speech during the ceremony, Shakari, who also served as the chief arbiter of the tournament, congratulated the citizens and residents of the UAE on the occasion of the 48th UAE National Day, and thanked all participants and the tournament officials for the success of the three-day tournament, which attracted some 162 players from 31 countries. Dimakiling finished a full point ahead of second-placer Grandmaster (GM) Elmar Magerramov of Azerbaijan, who suffered his only defeat at the hands of the Filipino to finish with eight points. GM Efstratios Grivas of Greece, who likewise lost to Dimakiling, won third place after securing the highest tiebreak among nine players with seven points each. Finishing from fourth to 11th place also with seven points are Mohammed Dilshad of India, WGM Mahri Geldiyeva of Turkmenistan, Dennis San Juan and Franz Barretto both of the Philippines, IM Ibrahim Sultan of the UAE, Abdul Kader Rayes of Syria, Kanan Al Namas of Jordan and Ali Mujawar Abid of India.