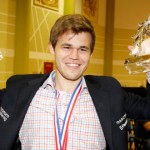 World chess champion, 23-year old Norwegian Magnus Carlsen, won the world blitz championship alone with 17 points in the 21-round tournament at the Dubai Chess Club on Friday. Together with the world rapid crown he won on Wednesday in the week long Fide World Rapid and Blitz Championhips in Dubai, Carlsen now holds all three Fide world titles. The $400,000 ... END_OF_DOCUMENT_TOKEN_TO_BE_REPLACED 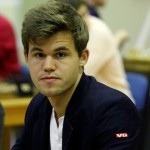 Traditional chess world champion Magnus Carlsen of Norway and former world number one Viswanathan Anand will lead a powerful field of over 100 Grandmasters (GM) during the Fide World Rapid & Blitz Chess Championship at the Dubai Chess and Culture Club (DC&CC) from June 15 to 21. This will be a rare opportunity for the followers of the game here ... END_OF_DOCUMENT_TOKEN_TO_BE_REPLACED